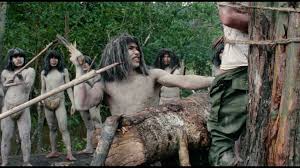 A Ranger, a Naval officer and An Army officer are captured by a strange tribe, deep in the jungle. The people of the tribe confer briefly, and then the chief walks up to the Army officer.

“We’ve decided to kill you,” he began, “and make a canoe out of your skin. However, in deference to your rank, we have decided to allow you to choose the manner in which you die.”

The officer nods, and replies “If you’ll just bring me my sidearm, and a single round, I’ll take care of it for you.” They do as he asks, and he shoots himself in the head.

Finally, the chief visits the Ranger. He explains the situation. The Ranger thinks for a few seconds, and replies “A fork.”

“Excuse me?” Says the chief.

“Bring me a fork.” The Ranger says

Perplexed, the chief brought him a fork. Without a moment’s hesitation, the Ranger starts stabbing with the fork. All up and down his arms, on his legs, his torso, just stabbing like a madman.

“What are you doing??!” The chief asked “That has got to be the most painful way to die!”

The Ranger looked up, with a glint in his eye, and shouts “F**K YOUR CANOE!”