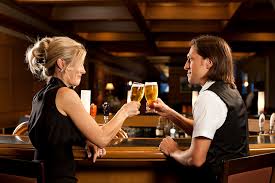 An average looking man walks into a bar and a beautiful woman approaches him the woman asks the man, “How would you like to get out of here?” and the man is stunned.

He never thought a woman like her would ever approach him so he agrees.

They both get into his car and drive really far.

He stops at a cliff with the view of the whole city.

Within seconds they start taking off their clothes. After 15 minutes of passionately making love they finally finish. They both put their clothes on and they both just sit there awkwardly.

The woman speaks up and says “I’m a prostitute and its going to be 100 dollars for my service.”

The man is stunned and saddened that she didn’t really like him.

He gives her the money and they both sit there awkwardly.

The woman tells him that she is ready to leave and the man replies “I’m a taxi driver and its going to be 150 dollars for the ride here and back.”