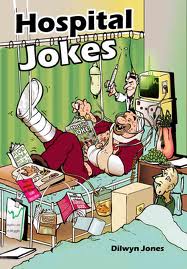 A few stories from hospital doctors and staff:  A man dashes into the A&E dept. and yells . . . ‘My wife’s going to have her baby in the taxi’.

I grabbed my stuff, rushed out to the taxi, lifted the lady’s dress and began to take off her underwear. Suddenly after protests from the lady I noticed that there were several taxis – – – and I was in the wrong one.

2. At the beginning of my shift, I placed a stethoscope on an elderly and slightly deaf female patient’s anterior chest wall.

3 One day I had to be the bearer of bad news when I told a wife that her husband had died of a massive myocardial infarct.. Not more than five minutes later, I heard her on her mobile phone reporting to the rest of the family that he had died of a’massive internal fart.’

4. During a patient’s two week follow-up appointment, he told me that he was having trouble with one of his medications.
‘Which one ?’. . .. I asked.

‘The patch; the Nurse told me to put on a new one every six hours and now I’m running out of places to put it!’

I had him quickly undress and discovered what I hoped I wouldn’t see. Yes, the man had over fifty patches on his body!
Now, the instructions includes removal of the old patch before applying a new one.

5. While acquainting myself with a new elderly patient, I asked ‘How long have you been bedridden?’
After a look of complete confusion she answered .’Why, not for about twenty years – when my husband was still alive.’

6. I was performing rounds at the hospital one morning and while checking up on a man I asked . .. …..’ So how was your breakfast this morning?’

‘It’s very good except for the Kentucky Jelly. I can’t seem to get used to the taste.’. . Bob replied.

I then asked to see the jelly and Bob produced a foil packet labelled ‘KY Jelly.’