Nokia have been very kind and allowed me to use the Nokia Lumia 800 for the last couple of weeks. I don’t control server farms using my phone, but I do use the phone more than most people. Here are my findings….

The new business arrangement between Nokia and Microsoft, where Nokia uses the Windows Phone OS on such smartphone devices, has been a breath of much needed fresh air to Nokia smartphones. It allows Nokia back into the race with others like BlackBerry, iPhones and all devices using the Android OS, whereas before I think they were a little panicky about which OS to use with which phone and it was rather worrying for Nokia diehards like me.

The Windows Phone OS is not new to me as I had a demo unit supplied to me by Microsoft not so long ago – my only concern about the Windows Phone OS is that it is rather different to other phone operating systems and takes a little getting used to, once you are over the hurdle it is a pleasure to use.

The Nokia Lumia 800 phone looks good, the big touch display gives it a welcoming look. The display is a 3.7” Corning® Gorilla® Glass AMOLED (active-matrix organic light-emitting diode) or what I call (A Magnificent Ogle LED) display – it may not be the best display

in the world, but I found it to be clear and bright. The Gorilla Glass is extremely tough and prevents the screen from damage.

I liked the rubber cover which protects the sides and back of the phone while keeping the touch screen available at all times. I know the other smartphones have covers, but with most of them you have to remove the phone from the cover before using it. This is more like the “Body Glove” aftermarket cell phone covers, but ships as a standard. This obviously adds to the robustness of the phone, as it protects against the occasional “knocking off the desk” symptom. It also smacks of the old Nokia 5210 which was indestructible.

The buttons on the right of the phone are for the volume, power/awake and camera. Although the buttons can be easily discovered when the phone is on, I do think the power button should have a symbol on the button to make it easier for people trying to switch the phone on – at least the first time. Maybe a big sticker for first time users saying “On button here…fool!”

Just like with the other device I used with Windows Phone OS, the search “touch key” is not practical, when you pick up the phone or turn it over the warmth from your hand or your hand itself often touches the key and it jumps to the search screen.

The charge port is the same port as the USB connector port, so that is rather practical, however the silly little flap that covers the port is dumb – leave it off, the port is too small for things to fall into it and you charge the phone so often, the flap becomes a nuisance.

The camera is an 8mega pixel Carl Zeiss Optics lens camera. The pictures I took were good, with the flash working rather well at about 5 metres distance in poor light. The sharing of the pictures once taken is a breeze having all the offerings for sharing one touch away from the picture.

The video, works well for the occasional video, but the only warning here would be that it will kill your battery if used quite a bit. From my estimation, a 20 minute video will suck the battery dry. In both instances here, for a phone they are good, but if you want to record special moments get a camera or video camcorder.

The phone is quick, a few people who looked at the phone all commented on the reaction times. The processor is a single Qualcomm 1400MHz – not that a phone processor will drive me wild – all you need to know is that it is very responsive.

The speaker is good, again not the best sound quality heard from a phone, but good enough, for better sound quality and I’m sure most youngsters already do this, simply buy decent ear phones and use those – the quality then is mostly determined by the quality of the headphones.

The telephone sound was good; the dialing buttons on the touch screen were practical and finding people on your contact list is simple.

With the Location service on (used for GPS directions, finding places of interest close to you and giving you measurements on a golf course) the phone lasts a day if you are lucky. Switch this off and the phone will last a good three days.

As I have the Location set to “off” as default, it would be nice to have any services that are dependent on location information to allow you to launch it at the same time as the application and then switch off again when the application is exited. 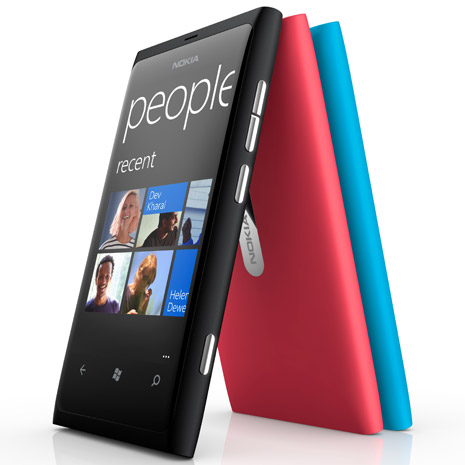 On the Windows Phone devices this is known as “People”, and again I am really impressed in the way this brings together all, or should I say most of the information on your contacts. It gathers Facebook, Twitter and LinkedIn information, what’s new from that person, pictures that person has on the various networks and also keeps a good history of your communication with them, very slick indeed.

I linked the email and calendar with my Google account – no issues at all. I would imagine the experience linking to MS Exchange would be even better.

Microsoft Windows Phone, Microsoft SkyDrive and Microsoft Office. Get the picture – enough said on that one.

I really liked the phone, although extremely different to the Nokias of the past, it reminds me of the reliable, solid and functional Nokia phones.

My usage on the device merely tickled the surface on what is available, mostly because I blunder ahead without reading manuals. For those who are a little more diligent, there are great tutorials at www.windowsphone.com (click on “How To”) alternatively the direct link: http://www.microsoft.com/windowsphone/en-US/howto/wp7/default.aspx

What I did not enjoy was the poor battery life when the Location, 3G and wireless are turned on. Maybe a software fix to use location services only when critical would be the answer.

Would I use this phone as my personal smartphone? – Definitely Yes!