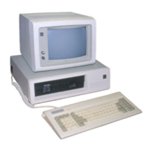 Technology has come a long way since I started working in the computer business for law firms just over twenty years ago. If someone had told me back then that within twenty years we’d all be using mobile phones, that computers would be a thousand times more powerful, flat television screens would hang like paintings on the wall, and that a worldwide network called the Internet would change the way we live our lives, I’d have written them off as being completely mad.

I remember 1988 clearly. Back then the IBM personal computer was just five years old. Fixed disks in desktop computers were typically 20MB, compared with 200GB today (a staggering 10,000 times larger). The processor in the IBM PC ran at 4.77MHz, compared with 2GHz in current desktop computers. (A GHz is 1000 MHz.) DOS was alive and well (and fast!), and business was just starting to realise the power of Lotus 123.

I also remember seeing a Hewlett Packard LaserJet printer for the first time. Back then printers couldn’t produce proportional fonts, so everything was produced in a courier or prestige elite typeface, where each character was the same width.

I remember regularly being asked whether we traded in typewriters, and finding it tough to explain to customers that the typewriter was no longer worth anything. I also remember how long typewriters were still used after that to print envelopes and sticky labels, and the odd form that had to be typed in manually.

I remember the sanctions at the time, and how difficult it was to buy international software like Word Perfect. The only way we could buy Lotus 123 was to get friends to bring a few copies back each time they returned from overseas. And Lotus was one of those instant successes. Poor Visicalc didn’t stand a chance against Lotus’ grid size and feature set.

Then I remember the Hewlett Packard LaserJet II, a beautiful piece of hardware if ever there was one. Using a ‘mux-box’ the laser could be shared by 8 secretaries at distances of up to 80 metres apart.

I remember hearing about Word Perfect, the word processing package that was taking the world by storm. And I remember being part of the surge as the locally produced GhostWriter became the de-facto standard for word processing in South Africa. Finally, here was a piece of software that could make the HP LaserJet printer sing! And at last, law firms could print using proportional fonts. Even more remarkable, GhostWriter produced letterheads on the fly, so law firms no longer had to keep a stock of pre-printed letterheads. I also remember thinking that I’d never be able to learn GhostWriter in a million years…

Looking back, word processing was probably the most significant productivity gain in twenty years for the legal profession. Before the advent of word processing, it wasn’t unusual to find a lawyer with four secretaries – and typing pools were common. Word processing changed all that, and within a couple of years, the ratio of secretary to lawyer changed to one on one.

Then I remember the first clone computers, and I remember how the early models caused software to hang. (I remember only too well the fights between hardware and software vendors as to who was to blame for the problem!) And I remember building computers from components, and how much cheaper they were than the brand names. Mostly I remember how easy it was to swap components when the no-name brand computer went wrong.

I remember how a tennis racquet manufacturer (Pro Kennex) started making computers (Arche), and how a tile company started making laser printers (Kyocera). I also remember how many garage operations sprang up in South Africa, manufacturing their own brand of computer. And I remember the price war as the well known brand names tried to kill the clone market off.

I remember how I encountered my first computer mouse – long before Microsoft Windows was launched, when an IBM file server came in for repair. I removed the cover and a real live field mouse hopped onto the top of the power supply to defend its home! Back then the doors on the floppy disk drives were large enough for a mouse to get in and out. Perhaps that’s why the design changed? And maybe the mouse was a sign, and it was I, and not Douglas Engelbart who was destined to invent the mouse! (And you thought it was Bill Gates, didn’t you?)

I remember the IBM ‘luggable’ computer – the first ‘portable’ on the road to the notebook computer. I remember how it had 17 different screw types, which made it a sod to repair. Then I remember the early notebooks, with a battery life of 20 minutes, and how it was better to throw them away if they went wrong because repairs took so long and cost so much.

I remember Jutastat, a CD-ROM which contained the full text of the SA Law Reports, the Statutes, and the Tax Cases. I remember how difficult it was to convince Advocates that this would change their lives. And I remember when Jutastat became a way of life for them.

Then along came Windows – which changed our lives forever. I remember how all of a sudden old XT and 286 computers became so slow that they were unusable, and I remember the hardware rush that followed. I remember Y2K, and being amazed how much money the technology industry was making from it. I also remember the non-event as Y2K ticked over. Thinking back I remember other hardware rushes too, like when we changed to Windows 95 and 2000 and XP…

I remember an account manager from Mustek Electronics telling me that soon we would no longer be able to buy monochrome display units, since all new displays would be colour only. I remember thinking that he was clearly smoking something!

I remember the first networks, and how all of a sudden it wasn’t so easy to be a computer technician. I remember the thick cables and the limited range, and how often they went wrong. I remember working through the night to get a network ‘talking’. I also remember how often bad cabling was the cause of the problem.

I remember being told by an IBM account manager that soon there would be no profits in hardware for dealers, and that we’d have to ‘add-value’ through services and software. I remember having no clue what he meant. (It took many years before it dawned on me!)

I remember being amazed that so many companies in America already had their own web pages, whereas in South Africa we were still years behind. And I remember the first viruses, and thinking that a public hanging (with castration) was too good for the perpetrators. (I still do.)

After that, it becomes blurred by speed: Firewalls. Databases. Wide area networks. Broadband. Case management. Practice Management. Digital dictation. Voice over IP. Digital printers. Aaaaaarghhh! It’s not easy being a computer technician these days, because there is now so much new technology that it has become impossible to keep up.

But what about lawyers and technology? Lawyers just want to practice law. They don’t want to become computer experts. (At least I don’t think so, and yes, there are some exceptions to this rule!) That’s why, after twenty-something years in the legal technology industry, I have decided to establish an independent, unbiased technology website – to help lawyers with technology.

You see, not all software for law firms does what the salesperson says it will do. And sometimes suppliers are here today, and gone tomorrow. Some software is better than others, and some hardware suppliers offer great service, while others stink. Prices vary from supplier to supplier. And vendors often forget to tell you about some of the great free software out there…

Finally, Tech4Law will make sense of it all – so that you can practise law (more profitably)!

Malcolm Pearson joined Compustat (Korbitec) Port Elizabeth in January 1988 as a junior computer technician, eventually taking over as National Branch Manager 19 years later. During that time Malcolm was involved in all aspects of legal computing, including word-processing, legal accounting, electronic publishing, the Internet, networking, and Conveyancing case management software. Two years ago Malcolm left Korbitec to join iDEED/SearchWorks. When the company was acquired earlier this year, Malcolm decided to fly solo and establish the Tech4Law journal.

News in brief for December ’08