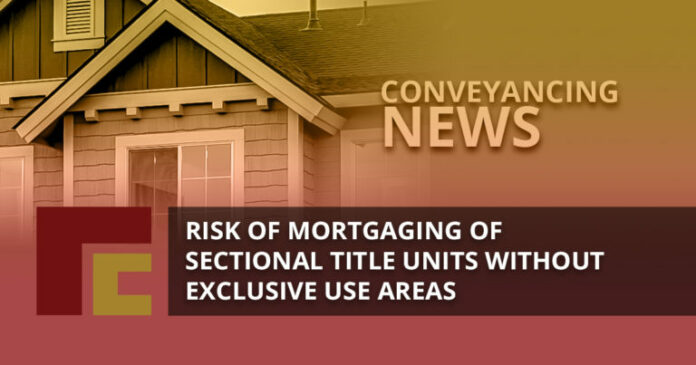 The Registrars at the Annual Conference in 1994 resolved that it is not the duty of Registrar of Deeds to enforce the mortgaging of the exclusive use areas, which resolution I respectfully cannot concur with. It is submitted that should an examiner determine that there are exclusive use areas, such as those referred to above, he/she must draw the attention thereof to the conveyancer concerned and disallow the registration of the bond over only the section.

Should the registration of the bond already be registered, the only way to rectify the omission is to cancel the bond and register a substituted bond. This practice, at its best, is extremely risky given the provisions of section 87 and 88 of the Insolvency Act 24 of 1936.

It is submitted that a collateral bond over the exclusive use areas would be a more viable option, and partially eliminate the risks as alluded to in the Insolvency Act, referred to supra.

It is contended that exclusive use areas, so closely linked with a section that they cannot survive independently, should be notarially tied to the section, however, the Sectional Title Act 95 of 1986 does not cater for this. A submission was made in this regard to the Sectional Title Regulation Board Meeting, but the Board did not rule that an amendment to the Act is viable.

The matter was, however, again submitted to the Registrars’ Annual Conference (see RCR 81 of 2011) and again the Registrars held that the mortgaging of a section and an exclusive use area cannot be enforced.

A possible solution to address the untenable situation would be to request the Sectional Title Regulation Board to consider amending the Act and prescribed forms to include reference to the exclusive use areas in the titles of the sections, in instances where they are so closely related to the section, that they cannot survive independently.