It is perhaps not a very well-known fact, but there is considerable scope to draw and argue a bill of legal costs, in South Africa. Where the bill is either assessed or taxed, there are a multitude of factors that influence the cost and price of legal services rendered, and it is often quite inappropriate to arbitrarily apply a tariff /rule on how an item presented will be dealt with by a taxing official. However, guidelines are always welcome, and any taxing official may be swayed on good argument presented.

This is the foundation of this survey; to establish an independent baseline available to anybody raising – or even disputing – a fee.

To date there are precious few guidelines available to us in respect of those typically ‘off-the-radar’ issues, such as telephone call or e-mail disbursements, travelling rates or even something as simple as a file opening fee. A number of previous surveys have confirmed what we all suspect, that there is a distinct approach found toward the application of hourly rates applied (in both litigious and commercial work performed) per the different High Courts’ areas of jurisdiction.

Different manners of billing, approaches to fee-capping, or what can be expected from counsel as either a reasonable ‘first day fee’ or hourly rate towards chamber work, and even something as basic as confirmation of the use of costs consultants – or the lack thereof – will emerge from the survey. The existing responses received as to what the industry considers as important / irrelevant criteria towards determining a fee on remuneration, is already quite insightful! 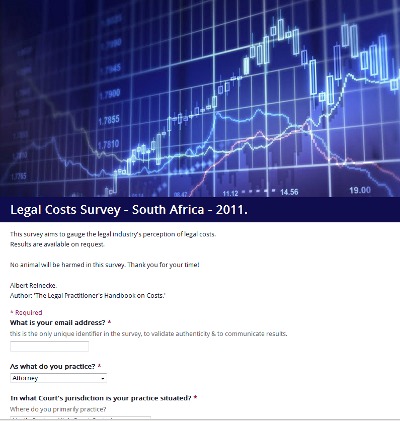 All it takes is 30 multiple-answer questions, two pages, 5 minutes of your time. The insight gained is invaluable and will have on-going effect years from now.

An article discussing the results of the survey – as an extract of the 2012 edition of the handbook – will accompany the survey results at no cost to participants via an email early in June 2011.

With the kind assistance of Tech4Law, we invite you to participate in this independent Legal Costs Survey for South Africa (2011) which allows you to have your say. It is not associated with any regulating body, but is simply research towards ‘The Legal Practitioner’s Handbook on Costs’ (2012), a self-published publication.