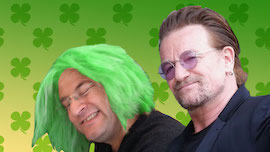 Drunk priest – An Irish priest is driving along a country road when a policeman pulls him over. He immediately smells alcohol on the priest’s breath and notices an empty wine bottle in the car.

He says: “Have you been drinking?”

The cop replies: “Then why do I smell wine?”

The priest looks at the bottle and says: “Good Lord! He’s done it again!”

Dr O’Mahony tells his patient: “I have bad news and worse news, John.”

The doctor replies: “You only have 24 hours to live.”

“That’s terrible,” says the patient. “How can the news possibly be worse?”

Dr O’Mahony replies: “I’ve been trying to contact you since yesterday.”

Paudie goes into a bar and orders seven shots of tequila and one Guinness.

The barman lines up shots and goes to get the Guinness.

When he comes back with the pint, all seven shots are gone.

The barman says: “Wow! You sure drank those fast.”

Paudie explains: “You would drink fast too if you had what I have.”

The barman asks: “What do you have?”

The guy reaches into his pocket and says: “Fifty cents!”