Great predictions on computers from some rather reputable sources: ‘I think there is a world market for maybe five computers’ 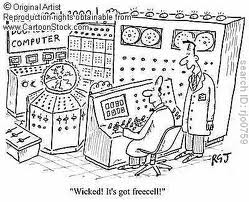 ENIAC – Short for Electronic Numerical Integrator And Calculator, the ENIAC was invented by J. Presper Eckert and John Mauchly at the University of Pennsylvania and began construction in 1943 and was not completed until 1946. It occupied about 1,800 square feet and used about 18,000 vacuum tubes, weighing almost 50 tons. While not completed until the end of the World War II, the ENIAC was created to help with the war efforts against German forces.

‘I have travelled the length and breadth of this country and talked with the best people, and I can assure you that data processing is a fad that won’t last out the year‘
Editor in charge of business books for Prentice Hall, 1957

‘But what… is it good for?’
Engineer at the Advanced Computing Systems division of IBM, commenting on the microchip, 1968

‘There is no reason why anyone would want a computer in the home’
Ken Olson, Present, Chairman and founder of Digital Equipment Corporation, 1977

Thanks to
Mathematics and Applied Mathematics Department
University of Cape Town
http://www.mth.uct.ac.za/digest/pcquotes.html