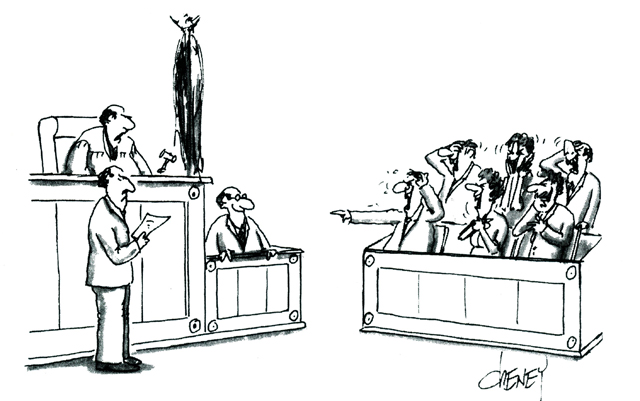 LAWYER: Do you recall the time that you examined the body?

WITNESS: The autopsy started around 8:30 PM

LAWYER: And Mr. Denton was dead at the time?

WITNESS: If not, he was by the time I finished.

LAWYER: Now sir, I’m sure you are an intelligent and honest man—

WITNESS: Thank you. If I weren’t under oath, I’d return the compliment.

LAWYER: Can you describe the individual?

WITNESS: He was about medium height and had a beard.

LAWYER: Was this a male or a female?

WITNESS: Unless the Circus was in town, I’m going with male.

LAWYER: What happened then?

WITNESS: He told me, he says, “I have to kill you because you can identify me.”

LAWYER: Did he kill you?

LAWYER: What was the first thing your husband said to you that morning?

LAWYER: And why did that upset you?

WITNESS: My name is Susan!

LAWYER: All your responses must be oral, okay? What school did you go to?

LAWYER: Can you describe what the person who attacked you looked like?

WITNESS: No. He was wearing a mask.

LAWYER: What was he wearing under the mask?

LAWYER: How was your first marriage terminated?

LAWYER: And by whose death was it terminated?

LAWYER: The youngest son, the 20-year-old, how old is he?

LAWYER: Could you see him from where you were standing?

WITNESS: I could see his head.

LAWYER: And where was his head?

WITNESS: Just above his shoulders.

LAWYER: Doctor, did you say he was shot in the woods?

WITNESS: No, I said he was shot in the lumbar region.

LAWYER: Doctor, how many of your autopsies have you performed on dead people?

WITNESS: All of them. The live ones put up too much of a fight.

LAWYER: What is your date of birth?

LAWYER: How far apart were the vehicles at the time of the collision?

LAWYER: Doctor, before you performed the autopsy, did you check for a pulse?

LAWYER: Did you check for blood pressure?

LAWYER: Did you check for breathing?

LAWYER: So, then it is possible that the patient was alive when you began the autopsy?

LAWYER: How can you be so sure, Doctor?

WITNESS: Because his brain was sitting on my desk in a jar.

LAWYER: How old is your son, the one living with you?

WITNESS: Thirty-eight or thirty-five, I can’t remember which.

LAWYER: How long has he lived with you?

LAWYER: Now doctor, isn’t it true that when a person dies in his sleep, he doesn’t know about it until the next morning?

WITNESS: Did you actually pass the bar exam?

LAWYER: Any suggestions as to what prevented this from being a murder trial instead of an attempted murder trial?