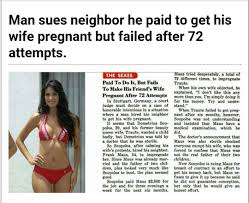 A 29 year old German man Demetrius Soupolos is suing his neighbour 34 year old Frank Maus for breach of contract after the latter failed to impregnate his wife in 72 different attempts to do so.

Soupolos had hired Maus to impregnate his former beauty queen wife Traute as he was sterile and Traute wanted a baby badly. He thought Maus would be a good choice as he resembled him and is a father of two.

Soupolos paid Maus Sh260,000 for the job and for three evenings a week for the next six months, Maus tried desperately a total of 72 times to impregnate Traute.

When Traute did not get pregnant after six months, Soupolos insisted Maus go for a medical examination which revealed he was sterile as well. Mau’s wife was then forced to confess Maus was not the real father of her two kids.

In his defence, Maus said he did not ‘guarantee’ conception, but only that he would give a ‘honest’ shot at it.