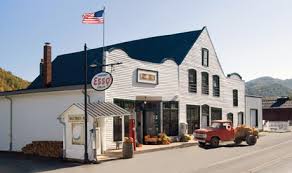 A salesman stopped for gas at a very old general store. While he was paying for the gas and an orange soda, he spied a dusty brass pig high on a shelf. He asked the old man behind the counter if he could take a closer look at the pig, but the shop keeper said that wasn’t a good idea.
The salesman pressed the issue, and finally the old man gave in and climbed a ladder to retrieve the brass pig.

After dusting it off, the salesman took a liking to the object. He took a long time in convincing the old man that, no matter what, he wanted the pig. They settled on $20, and the salesman drove off with the brass pig propped on the dashboard.

About two miles outside of town, he looked in his rear view mirror and noticed a pig trotting down the road behind him. He thought that this was a bit amusing, until another, and still another pig joined the first. As he drove, more and more pigs joined in and followed him. The faster he went, the faster they ran.

The salesman sped on at nearly a hundred miles an hour and got a bit of a lead on the throng of pigs that were in hot pursuit. He began to realize that this was what the old man was trying to warn him about. He came to a bridge over a river deep in a gorge, stopped, rolled down his window, threw the brass pig over the side, and sped off.

He was astonished as he saw the pigs in his rear view mirror. They got to the bridge, and stormed over the side, down to their deaths on the rocks far below.

The salesman drove back to the bridge and peered over the edge at the pile of pulverized porcine pursuers that plummeted over the precipice. He got back in his car and headed back to the stop where he bought the pig only minutes earlier.

The old man was expecting him, and already had the $20 bill in his hand. “I told you it was nothin’ but trouble. Want your money back?” he asked. “No” said the salesman. “I just wanted to know if you had any brass politicians.”