Debbie Naidoo of DLA – Cliffe Dekker Hofmeyr in Cape Town recently climbed Mount Kiliminjaro. As a long-standing client, the AJS team asked Debbie to agree to fly the AJS flag at the top of the “hill”. Mount Kiliminjaro is the highest freestanding mountain in the world, rising 5,882 metres or 19,298 ft from the base.

“I had a dream sometime late December 2009 that I had already climbed Kili, and I shared the dream with my daughters who then challenged me to do it. My birthday is in January and they decided to buy me hiking gear as gifts, so I really had no choice but to tackle Kili and I started doing research,” said Debbie. When we asked Debbie what she learned from the trip, she repleid “That the power of your mind is amazing and that you can do anything if you apply your mind to it. I also learned to be more humble as the porters and the guides on the trek were incredible.” 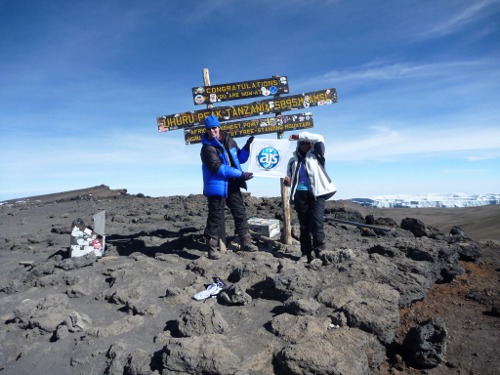 “It was tear jerking, beautiful, and if you were not close to God this really brings you closer when you see Gods creations, and knowing that he gives you the ability, strength and wisdom to do such incredible things,” she said. “When we reached the summit, it was so cold all I wanted to do was to take out the logo’s as my friend also had a few and she said when we get to the top please would I take out the logos as she was numb and was not sure if she was going to be okay if and when we reached the top. And everytime you ask the guide how much further he would say 15 minutes – and that would take us maybe another hour or two! Eventually when we got to Stella Point he said 5 minutes – but that was the longest 5 minutes in my life! (More like an hour!) The minute I saw the board with Uhuru Peak on it I ran and kissed it then just broke out in tears. We took out the logos, and as soon as the photos were taken we walked away from there and sat further down waiting on the rest of the group to summit. I felt good. No altitude sickness and I could still do the Waka Waka!”