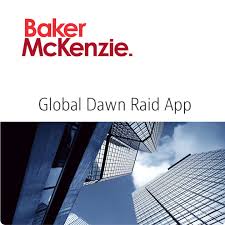 Baker McKenzie has launched an expanded version of its Global Dawn Raid App, a mobile application that, across 44 countries, provides clients experiencing a raid with real-time step-by-step guidance on their rights and obligations, as well as instant access to Baker McKenzie lawyers.

Leana Engelbrecht, Senior Associate in the Competition and Antitrust Practice at Baker McKenzie in Johannesburg explains that dawn raids have always been an important enforcement tool for competition regulators.

“They provide the regulator with a wide scope of powers to enter and search the premises of a company under investigation for anti-competitive conduct and to seize any document or item.  During 2017, the South African Competition Commission twice raided fresh produce agents suspected of price fixing and raided an unprecedented 25 fire sprinkler installers. It is, however, not only competition regulators that are empowered to conduct dawn raids and many other regulators have these powers, notably white-collar crime enforcers and tax regulators.

“Unsurprisingly, dawn raids are hugely inconvenient and stressful for the companies that are subjected to them and come with a high degree of surprise and uncertainty.  It is for that reason that it is important for a business to have a plan in place to deal with a dawn raid in the unfortunate event that it is subjected to one. The Baker McKenzie Dawn Raid App provides an innovative and easy to use tool to do precisely that,” she notes.

Increasingly, agencies coordinate their investigations, so a company can find itself being raided in several countries on the same day. The App is a cutting-edge platform that provides practical assistance and peace of mind for individuals on the ground handling unannounced inspections. It answers a whole range of practical questions on a country by country basis under local law such as “Can inspectors demand passwords to allow IT access?” “Can employees leave the building with their laptops?”

Key features of the App include:

Since launching our Global Antitrust Dawn Raid App earlier this year, we have been inundated with positive feedback on its usability and content.

“To continue to meet the needs of our clients, we chose to produce customized guidance and provide bespoke response teams for those potentially facing anti-bribery and tax raids in addition to antitrust. The app now also features local language guidance for our clients in China and Japan, as we continue to develop this product to be of most utility for our clients around the world.”

Baker McKenzie’s Global Dawn Raid App is an expansion of the Firm’s Global Antitrust Dawn Raid App, which was launched in April 2017. The expanded App provides clients with a holistic solution to Dawn Raid response around the world.