The study finds that after sluggish uptake, hosted PBX is finally taking off, and is among the few growth areas in the entire PBX market (itself in decline), along with on-site IP-based converged PBXs (called CBXs by BMI-T).

The future is here
Rob Lith, business development director, says the company’s success is due to the fact that it fully leverages the benefits of hosting and the power of the Internet Protocol – the voice architecture of the future.

Based on standards-based, open technology, the Telviva switch is extensible to add future unified communications functionality as and when it becomes available (including videoconferencing), as well as full business process integration (including CRM and BI).

The findings
Legacy and CBX/IPT
Overall shipments of large legacy PBX systems will likely continue their decline, while medium-sized and small systems and CBX (ITP) in general have a better outlook, BMI-T finds. The study also found the small and large size categories for the Legacy systems unit shipments declined sharply since 2010.

Open-ended growth path for hosted
“The unknown factor that makes predictions hard for overall shipments is to what degree legacy and CBX/IPT systems will be replaced by hosted systems, or retained in a sweating of assets,” says Dave Meintjes, MD, Connection Telecom.

What is optimistic for hosted is pessimistic for the rest of the market, and vice versa, says Meintjes. Hence, in a pessimistic scenario for hosted, where there are concerns over VoIP security, confidentiality, reliability, quality and loss of control, revenues will be more of the order of R150 million in total, making up around 5 to 6% of total revenues across categories. 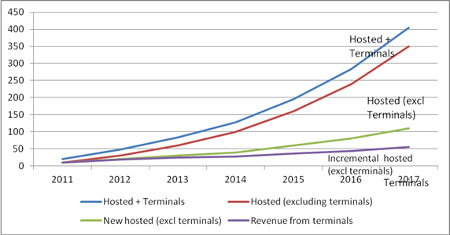 For the first time, 2012 saw IP handsets overtake the traditional digital handset in unit shipments which can be attributed to the price reduction of IP handsets. (entry-level IP handsets now sell for under R1000).

Market drivers
BMI-T’s Selvie Naicker, the report’s author says the main success factor of hosted solution providers is their focus on large customers, which benefit most from the savings of single centrally-hosted solutions across multiple sites, as well as zero-rated VOIP calls between branches.

“Connection Telecom’s customers are a mix of small and large, with a few large accounts in retail and financial services dominating revenues,” it finds.

The authors note that early movers have become entrenched in the market, an advantage that small players and others invested in legacy network infrastructure will find difficult to emulate. For these players it will be more cost-effective to ‘white-label’ an existing solution such as Connection Telecom’s than to create it from scratch.

Other factors include the rising credibility of hosted PBX solutions, with most of the bigger telcos and ISPs already offering or launching products, as well as the abovementioned cost advantage of VoIP.

Many local providers have gone with Broadsoft – a first-world favourite – but Connection Telecom offers a price advantage over this soft-switch vendor, states the report.

About Connection Telecom
Connection Telecom was founded in 2004 as a pioneering, independent provider of proven carrier-grade IP PBX solutions to Southern African businesses. The company’s team boasts more than 80 years in collective telecommunication experience. Connection Telecom offers solutions and services based on the Telviva family of enterprise PBXs and other products aimed at enterprise customers, smaller businesses and vertical industry applications. Feature-rich, managed and open (extensible), these solutions allow freedom of choice in handsets and add-ons, a low total cost of ownership and call cost savings of up to 40%. The company has offices in Cape Town and Pretoria. Its major clients include Engen Petroleum, FNB, Lewis, RMB Asset Management, UCS and Vox Telecom.
For more information please visit: www.connection-telecom.com