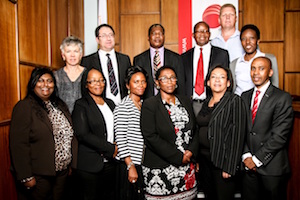 LexisNexis South Africa, a leading provider of content and technology solutions for the legal and professional markets, has continued its drive to make the practice of law more efficient and mobile, by introducing a Wi-Fi hotspot at Kimberley’s Northern Cape Division of the High Court of South Africa.

“Northern Cape legal professionals will now be able to conduct extensive legal research online and access statutes and law reports directly from the court building without needing a 3G network or a mobile device. This will save them time and aid their efficiency as they handle critical legal proceedings.”

Last said all users could access the electronic loose-leaf solution LexisMobile while offline and would receive daily free data bundles to enable quick and convenient access to other legal reference material via their MyLexisNexis subscription accounts.

A new survey conducted by LexisNexis in partnership with the Law Society of South Africa showed that 91% of attorneys conduct legal research online via PC or laptop and that online research was the preferred format for more than half of those surveyed, compared to print research. Investments in technology were a priority for 62% of the respondents having already increased their tech investment or planning to do so in the near future.

Last also referred to an international workplace productivity survey conducted by LexisNexis, which revealed that 90% of legal professionals in South Africa said that not being able to access the right information at the right time was wasteful and impeded productivity.

“Legal professionals find having to do research away from court – where they spend the vast majority of their time – time-consuming. Online access helps them save time on research and adds intelligence to specific and filtered legal content, which is increasingly important in this tough environment,” he added.

He said the WiFi project was one of a number of LexisNexis digital innovations that aim to uphold the Rule of Law and make the profession more efficient. These include sophisticated but user-friendly online research tools, digital libraries, mobile solutions and apps, alongside traditional print solutions.

LexisNexis has seen a threefold increase in year-to-date usage across the first 12 courts between 2015 and 2016. From January to July 2015, users took advantage of the LexisNexis hotspots to access 515.5 gigabytes of data and for the same period in 2016, 1529.86GB of data was used, with 909.44GB or 59% being used on LexisNexis content. The biggest users are at the Pietermaritzburg High Court, followed by the Johannesburg Magistrates Court and the Pretoria High Court

“Our driving mission every day is to provide the information, content and tools that enable legal professionals, and those in the tax and accounting, government, academic and corporate sectors, to uphold the Rule of Law,” said Last.

The company has also invested over R8.9 million since 2012 to provide tech resources to more than 171 newly qualified, previously disadvantaged advocates through its Advocate Advancement Programme, which is endorsed by the General Council of the Bar of South Africa and Advocates for Transformation. This year the programme was also extended to attorneys through the Attorney Advancement Programme, a new partnership between LexisNexis, its subsidiary Korbitec and the Attorney Development Fund.

Shifting the “needle” in the Entrepreneurial Struggle