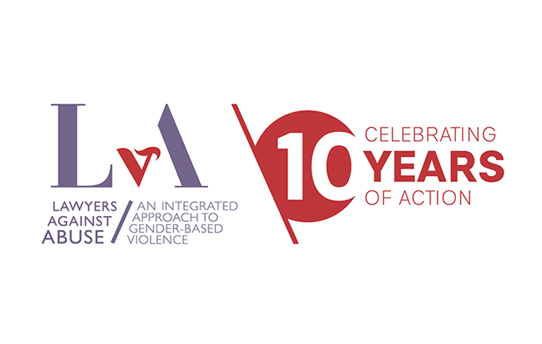 Lawyers against Abuse (LvA), a non-profit organisation that provides free legal services and therapy and counselling to victims of gender-based violence (GBV) in South Africa, is marking a decade of action against GBV. Since its inception in 2011, LvA has provided critical support to over 1 300 GBV victims and empowered over 50 000 community members through outreach programmes and educational workshops. LvA has also helped secure 186 protection orders and supported 35 convictions in criminal cases of GBV.

In honour of this milestone anniversary, LvA is launching their Unite. Influence. Act. campaign which provides an opportunity for supporters to join a virtual movement by pledging their support in the fight against GBV. Featuring 94.7 radio host, GBV activist and LvA Ambassador Hulisani Ravele, the pledge includes three commitments that you can make, using the hashtag #CountMeIn, to raise awareness and confront GBV.

Over the last 10 years, LvA has also developed strong partnerships with local police, courts, clinics, service providers and community structures which have allowed the organisation to foster greater accountability and strengthen capacity within the justice system. With increased support, LvA will be able to do even more to combat the scourge of GBV in South Africa.

“A decade on, as we mark this anniversary in the midst of the COVID-19 pandemic, strengthening the justice system’s response to GBV and ensuring the rights of GBV victims are more pressing than ever. We are launching the Unite. Influence. Act. campaign to encourage every person to get involved in the fight against GBV,” commented LvA Executive Director, Lindsay Henson. “By bringing people together to stand in solidarity with victims of abuse, to speak out against violence and encourage others to do likewise, and to plan an active role in combating GBV, we hope to see a reduction in the levels of violence plaguing our communities,” she added.

To find out more about the campaign and how you can get involved, visit the LvA website:
www.lva.org.za

About Lawyers Against Abuse (LvA)
LvA is a solution-driven non-profit organisation that works to strengthen the justice system’s response to gender-based violence by providing legal services and therapy to victims, engaging with state actors and empowering communities.