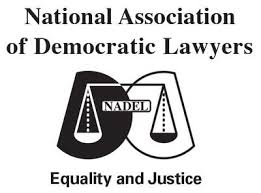 The National Association of Democratic Lawyers, (“NADEL”), held its 32nd Annual General Meeting and Policy Conference starting from the 14th and concluded on the 17th March 2019. The conference proceedings were held at the Emperor’s Palace in Johannesburg, under the theme “Poverty, Inequalities and Corruption Symptoms of a State in Gradual Collapse”.

The conference was attended by more than 300 (three hundred) delegates drawn from the ranks of attorneys, advocates, magistrates, Deans of law, representatives of law students from all Universities. The conference was the coming together of all progressive lawyers in the legal fraternity.

The conference saw together some of the country’s greatest legal minds, national and international dignitaries under one roof discussing a series of pertinent topics. The Keynote address on the theme was delivered by The President of the Supreme Court of Appeal, Madam Mandisa Maya.  The country’s newly appointed National Director of Public Prosecution, Advocate Shamila Batohi, addressed delegates to the conference under the theme, “Building a South Africa in which all shall enjoy human rights as equals”.  The conference also discussed Land Reform, this discussion was led by a panel consisting of Adv. Gcina Malindi (NADEL Land Committee Chair), Mr Floyd Shivambu (Deputy President of the Economic freedom Fighters) and Solly Mapaila (the Second deputy general secretary, South African Communist Party)

Critical and difficult topics, which focused on the central challenges facing the society, were discussed and the conference delegates took critical resolutions in connection therewith. Below, are some of the sub-themes discussed by the delegates:

The conference noted the following:

During the evening of 16th of March, NADEL held its second Annual Pius Langa Memorial Lecture which was delivered by the Honorable Minister of Energy, Mr Jeff Radebe. Mr Radebe gave a touching recollection of his involvement with the Late Chief Justice describing the high moral character and values of the late Pius Langa.  He encouraged all present to assimilate the values of Pius Langa.

NADEL also launched, the Pius Langa Human Rights Scholarship, which is to fund deserving student to pursue studies in the field of human rights.

NADEL is committed in ensuring that it continues to play a vital role in fighting social ills and all forms of injustices afflicting our country, as identified by the conference. In doing so, the delegates in the conference of NADEL passed a number of resolutions to ensure that it achieves the noble objective of free society in which all enjoy equal rights.  Full detailed resolutions shall be issued shortly