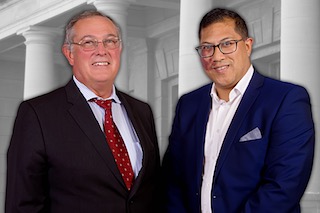 Mr Brown says his objective for the coming year will be to utilise the momentum of transforming the legal profession, through the Legal Practice Act, to implement structures that will lead to a change in the demographics of this profession, a change in the power dynamic within the profession and ultimately to a more equal wealth distribution amongst the lawyers of this country. ’However, within this context it will always be necessary for us to ensure that we maintain a culture of excellence as a profession in whatever we do,’ he stresses.

Similarly, Mr Bekker notes that a smooth transfer to the Legal Practice Council and the continued existence of a representative body for all legal practitioners are important. ‘I would also like to get young practitioners more involved in professional affairs, as well as enhance mediation and arbitration by attorneys,’ he says.

The Legal Practice Act 28 of 2014 is expected to be fully implemented in 2018, bringing the Legal Practice Council – the new, national regulatory body for attorneys and advocates – into effect.

Walid Brown is a director at the Cape Town office of Werksmans Attorneys where he focuses on litigation and dispute resolution as well as insolvency, business rescue and restructuring.

He is an executive member of the Western Cape Branch of the Black Lawyers Association (BLA) and has represented the BLA on the LSSA Council since 2016.

Mr Bekker has been an attorney for 40 years this year having been admitted as an attorney and conveyancer in 1977 after having competed the BIur degree at the University of the Free State. He practiced for his own account until he joined Cloete & Neveling in 1982.

At international level, Mr Bekker represents the LSSA on the Council of the Commonwealth Lawyers Association.

At provincial level, Mr Bekker has been a Council member of the Law Society of the Free State since 1989 and was its President from 1994 to 1996.

ISSUED ON BEHALF OF THE CO-CHAIRPERSONS OF THE LAW SOCIETY OF SOUTH AFRICA, WALID BROWN AND DAVID BEKKER

by the Law Society of South Africa Communication Department
Tel: (012) 366 8800 or website: www.LSSA.org.za