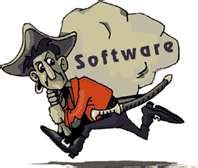 Pirated computer software is currently costing legal resellers and the local computer industry millions of rands a month through lost revenues – and leaving thousands of unsuspecting computer owners up the creek without support. Microsoft South Africa’s Charl Everton says her company alone is currently busy investigating more than 60 computer dealers suspected of selling fake or illegally licensed software – and that’s “just the tip of the iceberg,” she says.

Overall, the trade in counterfeit goods is costing South Africa millions of rands annually in lost revenues, says Mandla Mnyatheli, chief director of company and IP enforcement with the Department of Trade and Industry (DTI).

“The exact impact of counterfeiting is hard to quantify, but there’s no doubt this trend has been increasing. We have an urgent challenge in South Africa to stem this tide,” said Mnyatheli.

The Deputy Minister of Trade and Industry, Ms Tobias-Pokolo, is spearheading a nationwide campaign to raise awareness of the scourges of piracy and counterfeiting, says Mnyatheli. All relevant enforcement agencies and government departments in the security cluster will be part of this campaign.
The biggest problem with piracy, though, says Ms Everton, is that there is growing evidence that many local criminal organisations are now involved in counterfeiting to some degree – which effectively means that people who buy pirated goods are funding organised crime.

“All indications are that local criminal syndicates are following the global trend of branching out into counterfeit software as a low-risk, high-profit sideline to other activities like hijacking and drug trafficking,” she said.

Ms Everton was speaking as part of Microsoft’s worldwide ‘Consumer Action Day’ – a drive across 70 countries to protect consumers and increase awareness of the risks of counterfeit software.

She says that every year, thousands of consumers and businesses buy counterfeit products that either don’t work or actually harm the users by opening the door to online spam, virus and fraud networks. Microsoft’s tests of software on some popular sites have shown that up to 35 percent of counterfeit software contains harmful code.

Globally, Microsoft has had more than 300 000 voluntary reports in the past two years from people who unknowingly purchased counterfeit software that was often riddled with viruses or malware. Victims risk losing personal information, having their identities stolen, and wasting valuable time and money.

“Consumers everywhere are coming to us with complaints about counterfeit software,” said Dale Waterman, Microsoft’s Corporate Attorney for Anti-Piracy for the Middle East and Africa region. “They’re asking what they can do to protect themselves. They want facts. And they want industry and government to stand up and take action. Our commitment is to do everything we can to help them.”

According to data released by Microsoft this week, based on the results of a broad consumer survey which asked more than 3800 men and women in 20 countries around the world about their perceptions of counterfeit software, 80 percent of consumers polled worldwide have a range of concerns about the risks of using counterfeit software, and 70 percent said they believe genuine software is more secure, more stable and is easier to keep up-to-date.

But the presence of high-quality fakes in the market today makes distinguishing counterfeit from genuine a continuing challenge for consumers. The majority of those polled – 73 percent – say they would choose genuine software given the choice, and more than two-thirds believe that consumers in general have to be on the lookout or they could mistakenly buy counterfeit software.

As part of its awareness activities, Microsoft launched its “Don’t Fake It” campaign. There, they get to be part of a music video with popular local band Prime Circle.

There has been no shortage of anti-piracy action by authorities this year. In the past month alone, there have been more than 20 enforcement actions involving the SA Police Services, the DTi or Microsoft’s attorneys against resellers offering pirated software in Bloemfontein and Gauteng. Numerous hard drives used to make counterfeit copies of popular software suites were seized in the raids.

Several of the dealers have been served with ‘cease and desist’ letters by Microsoft’s attorney’s around the sale of counterfeit software and PCs loaded with illegal software.

One of the men netted in the swoop, a prominent Bloemfontein IT consultant, has been charged with offences under the Copyright Goods Act after being caught selling high-quality counterfeit software and product keys on a popular online site.