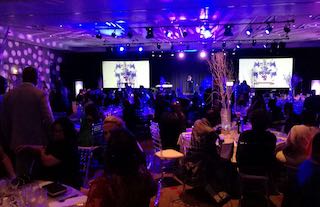 The Cape Law Society annual general meeting and gala dinner was held at the Hemingways Hotel and Conference Centre last Friday and Saturday in East London.

I was not there for the AGM Friday sessions, but heard that the discussions and speakers were topical and well presented.

The gala dinner venue was decorated in the same venue as the earlier AGM and it really looked stunning – I tip my hat to all the people involved in preparing the venue is such a short time.

While the impeccably dressed people started filling the room, the East London singer and bass guitarist, Kerry Hiles, entertained us with many familiar songs which she performed brilliantly. Ays Mbusela then took over entertaining the audience with his powerful voice and talent on the ivory keyboard. Through the evening they shared the stage, once or twice singing a duet. The performance was top notch.

The MC for the evening was comedian, Alfred Adriaan who then kicked off with his humour to break the ice before hosting the awards presentations.

Congratulations to the following winners of the selected categories this year:

Award for Highest Mark Achieved in the Attorneys Admission Examinations for the period July 2016 to June 2017 – Talia Ben-David from Cape Town.

Award for Highest Mark Achieved in the Conveyancing Examinations for the period July 2016 to June 2017 – there are 2 recipients with both having received the same mark – Bronwyn McGregor and Leigh Vencencie both from Cape Town.

Award for Highest Mark Achieved in the Notarial Practice Examinations for the period July 2016 to June 2017 – Jonell Rorich from Cape Town.

Recognition of Service as Members of the CLS Council, presented by David Geard to Mr Roland Meyer and Oom Koos Alberts, both from Port Elizabeth. Mr Geard delivered an accurate and humourous biography of both recipients, which entertained the audience no end.

Socialising, dancing and reminiscing good times followed for the rest of the evening – it was really special to get to see old friends, but I was amazed at how many new people I met, just from being at the event.

Saturday morning, I joined Mr Chris Pearson and Ms Shana Derman on the stage to present and discuss “Future Proofing your Practice”. Mr Chris Pearson tackled the topic “How to remain profitable”, I presented “How to be marketable” and Mrs Shana Derman spoke on “How to stay secure”. The no bull straight shooting tips from this session were real gold nuggets for law firms.

The event closed with the Constitutional Law Workshop, facilitated by Darryl Burman and panellists, Dr Makhosi Khoza and Egon Oswald.

I was suitably impressed with the gala dinner, the awards, speakers, the winners and the networking opportunity this event encompasses. Compliments to the CLS and the people who helped organise such a special function. I look forward to being part of these in the future.