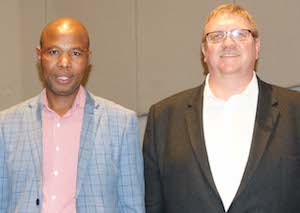 Their experience will be invaluable during this year, which will see fundamental changes in the governance of the legal profession when the Legal Practice Act 28 of 2014 is expected to be fully implemented towards the end of this year. The Legal Practice Council will take over the regulation of all legal practitioners – attorneys and advocates – and the four statutory, provincial law societies will fall away. The four law societies make up four of the six constituent members of the LSSA, the other two being the National Association of Democratic Lawyers (Nadel) and the Black Lawyers Association.
The Co-Chairpersons will need to steer the attorneys’ profession through fundamental changes and the LSSA into a new, representative body for legal practitioners which will represent, promote and protect legal practitioners, while the Legal Practice Council will be their regulator.

The Co-Chairpersons say: ‘Thank you to the profession for having confidence in electing us. This promises to be an exciting year of hard work and new challenges and we call on members of the profession and public to take our hands and provide input on how we can best improve the organisation and image of the profession.’

About the Co-Chairpersons
Human rights lawyer and activist, Mvuzo Notyesi was recently re-elected President of the Nadel. He holds the BProc and LLB degrees from the University of Transkei, was admitted as an attorney in 1999 after completing his articles and attending the LSSA’s School for Legal Practice in East London. He has practised as director at Mvuzo Notyesi Incorporated since 1999.

Mr Notyesi has been a Council member and a member of the Management Committee of the LSSA for a number of years. He represents the LSSA on the Judicial Service Commission. He has previously been a council member and acting President of the Cape Law Society, and a member of the Board of Legal Aid South Africa. Mr Notyesi has a passion for education and has been a part-time lecturer at the University of Transkei and an instructor at the LSSA’s School for Legal Practice in East London. He is also an examiner for the Attorneys Admission Examination. Mr Notyesi is Chairperson of the Notyesi Foundation, which awards bursaries to disadvantaged students to attend university.

Ettienne Barnard is currently the Vice President of the Cape Law Society where he performs duties on its Council, Magistrates’ Court and other Committees. He holds the BA LLB degrees from Stellenbosch University and was admitted as an attorney and conveyancer in 1993. He is a director of the community-based commercial and litigation firm, Ettienne Barnard Attorneys in Somerset West. The firm also represents clients in human rights issues on a pro bono basis and has successfully defended pro bono clients’ Rights to Housing in the High Court and Supreme Court of Appeal.

In the field of skills development, Mr Barnard is a mentor of young legal practitioners and has participated as a moot court judge in local and international Moot Court Competitions. He is an educator at heart and in addition to presenting practical training, drafts and lectures in court practice, commercial subjects and practice management for the LSSA Legal Education and Development (LEAD) division, he has chaired and held executive or other positions on the governing bodies of local and regional community organisations.