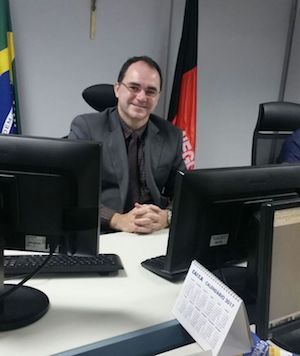 Visiting Judge Francisco de Assis Barbosa, a Labour Court Judge from the Federal Court in Brazil talks to Tech4Law about the electronic system used by the courts and how they implemented the system in a methodical process, replacing the paper process to an electronic process over the last couple of years. This electronic process has shortened the average case duration by 7 months.

Gavin McLachlan from the IT Steering Committee for the Law Society of South Africa arranged and assisted with the interview. The reason for Judge Barbosa’s visit was to demonstrate and share the knowledge of the system to their South African counterparts in both private law and Department of Justice. Mr McLachlan mentioned that from his recent visit to Brazil, he noticed that their processes and infrastructure were very similar to our process in South Africa.

The electronic court system has been slowly implemented over the past 10 years, Judge Barbosa said that this was one of the reasons for the success of the system, as the idea was to take the paper process and start by converting it to an electronic form. Once they had got people onto the electronic platform they started improving the electronic process to make it more efficient. The system is available through any web browser; however, it was developed for Mozilla Firefox as they found it lighter, faster and more secure than the others.

One of the biggest positive factors in the success of the electronic system, was the fact that the state judicial department was the driving force behind the system. In South Africa at the moment, we find that all the justification and driving of such a system is done by private enterprise, with all the effort going into convincing the Department of Justice to authorise and embrace an electronic system.

Security to the system is handled through a physical device, being a USB stick which then has a second matching authentication via a secret pin password. Judge Barbosa said that even if somebody managed to get both security checks and changed information, the user could reverse those changes and the full audit history will show the changes.

The system is a collaborative workflow system that uses PDF documents for all the documents. Initially, assistance was given at the courts to help people load paper based documents into the system, although these days the assistance is very seldom used.

Judge Barbosa said that the decision to go electronic has been a great improvement in the system and nobody on the system would dare go back to the way it was in the paper based process. He said that the benefits of the electronic system were its efficiency, it stopped fraud, it never loses documents and allows for cases to be heard in remote locations.

Court recordings are still text based (the audio is not yet recorded), so each court has a stenographer to capture what is being said and immediately entered into the system.

Paper is still used for the initiation of the process, as you don’t know all the parties email addresses when commencing the case and when using the sheriff to serve or attach to/from the public. The public is allowed access to the judge’s comments, and to the progress steps for the case, each external party is allocated a temporary login for the case.

I took two major points from the interview with Judge Barbosa – the first point is that the system does not have to invent new processes or be an all-encompassing system to handle everything in the court process, a simple introduction of a “paper to PDF vault” would be a simple and extremely effective step. Second, unless the Department of Justice drives a simple process like this, the project is dead in the water.

Thanks to Judge Francisco Barbosa for his time and information and to Gavin McLachlan for arranging the interview.