Business – The role of salary in motivation is oft explored; the summation of which is self evident: salary matters much for the poor and much less for the wealthy. Large organisations tend to award across the board salary increases, which, incidentally, is going to be about 3% this year, according to PayScale.

The problem with such an approach is that a one-size-fits-all approach is demotivating, especially to high-performing employees. It is said that the perception about a company’s commitment, or lack thereof, to fair payment of employees is a top priority for Millennials – companies play a talent and perception game and what and how you pay are key pillars of talent strategy. Failing to address this properly is nothing less than corporate indifference.

For those of you who are not nerds, you might wish to download Google Lens: to see what the does, take a look at the site https://fieldguide.gizmodo.com/what-can-google-lens-actually-do-for-you-right-now-1823957324

There is a PMB chemist who manufactures bugs that digest oil spills. The latest, in cleaning up solutions, is a PET eating enzyme which will, if successfully evolved, enable us to break down some of the most commonly used plastics.

The Fais Ombud has reportedly dismissed all property syndication complaints where the complainant has failed to provide the name of the broker in the complaint. On investigating why, it turns out that many of the complaints relate to sales, based on premium rather than appropriateness – a reckless, replacement of policy, churn for which the broker takes responsibility.

Plaas reported that, since the advent of democracy in South Africa, some 2.3 million people had been displaced from farms, of whom 940,000 had been forcefully removed. It is believed that this displacement was and is driven by the perception, on the part of farmers, that land reform would be implemented on the basis of giving farm labourers rights to the land on which they lived and worked.

Many years ago I kept statistics of the race of legal practitioners, their income and the number of partners comprising their practices. This predated POPI.. One statistic, that defied pigeonholing, was why they were so many practitioners in small or one-man practices. The reasons given by them for such choices were multifarious but, at the time, I was more interested in the economic reasons and consequences for their choices. I have, of late, wondered why practitioners group together in especially large practices. Sure, there are the obvious reasons, efficiency brought about by specialisation, and obviously one cannot specialise beyond a certain point as a solo practitioner: who, after all, will give really big work to a guy working from his garage? The unpleasant truth about big practices is that such practices are unkind places. In a small firm one tends to practice with a friend, in a large practice the only glue holding oft opinionated and strong willed persons together, is money, recognition (which probably follows money) and convenience. A tenuous bond; loyalty, that follows money, is fickle.

Hakuna Motata, a much loved children’s song from The Lion King, was used this week by Zapiro to parody Judges Nkola Motata & Hlope after the former had been described as a racist by the tribunal which eventually heard his case. Not immediately noticeable in the cartoon, are the dates on which the respective complaints against them originated, i.e. respectively 2007 and 2006. We often complain that justice is slow but justify this by suggesting an inexorable but fine sifting. In the case of these two gentlemen, the constipation in our system of justice in acting against its own errant representatives, is nothing less than reprehensible.

Conveyancers’ duty of care
Two firms of attorneys were sued by the disgruntled owners of properties on which residential buildings were demolished with the intent that the property be consolidated and that a developer would construct a scheme on the whole and provide each owner with a better home. The developer was sequestrated – as often is the case. The action taken against the attorneys acting on behalf of the developer was based on the allegation that the attorneys had failed to advise those involved in the scheme of the risks inherent in the transaction. The case referred to below turns on prescription but the underlying issues are instructive. Be careful.
http://www.justice.gov.za/sca/judgments/sca_2018/sca2018-055.pdf

Payment in terms of section 129 (3) NCA
The case referred to below is interesting as it deals with default of a creditor and the effect of payment on his behalf. The SCA decided that payment, to a bank, by a third, which payor did not state that it paid on behalf of debtor, which had defaulted on it’s obligations to the bank, did not cure the debtor’s default.
http://www.justice.gov.za/sca/judgments/sca_2018/sca2018-054.pdf

Credit guarantees and registration in terms of section 40 of the NCA
The NCA provides that anyone who provides a credit guarantee or surety should be registered as credit provider in order to validly do so. In this case a suretyship was given wherein the surety bound himself as co-principal debtor. The SCA found that the Act applies to a credit guarantee only to the extent that the underlying contract is a credit transaction. The agreement was found to be a once-off transaction and did not fall within the ambit of the provisions of the NCA. Worth a look for those who deal in these things. Http://www.justice.gov.za/sca/judgments/sca_2018/sca2018-053.pdf

Home: the term home is an evocative one; it unleashes a visceral connect, saturated with emotion: a place of safety, a fortress, a prison, a final destination. Most of us would know the haunting melody of Going Home but probably not the lyrics: if you cannot recall this, search https://www.youtube.com/watch?v=iJFhTb1gi6Y , in this case sung by Sissel Kyrkjebø, a Norwegian crossover soprano that I would seriously consider running away with. Go home, take a few minutes and listen to one of the finest voices gracing our planet. Her Pie Jesu and Summertime are fine examples.

A sense of humour is a rated trait: quite the opposite of sourpuss. So, why do we find things funny? There are a number of theories, probably best illustrated by a Stanford article: https://plato.stanford.edu/entries/humor/ Examples of funny snapshot situations are cartoons. Most of these are just funny, some satirical (think Zapiro), some, when one goes to the dark side, downright offensive; one does not generally become involved in the latter as reactions thereto are mixed. But, hell’s teeth, who wishes to live an anodyne life, unoffended? Take a few (gentler ones), for instance:

Remains to be seen if glass coffins become popular.

What do you call a cheap circumcision?
A rip off.

Dark humour is like food, not everyone gets it. 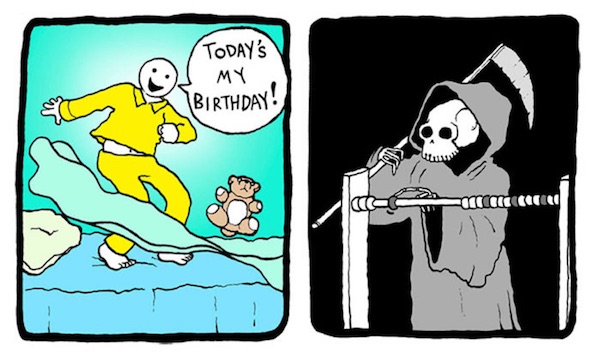 To be included in the Daan Steenkamp’s regular newsletter, click on this text and get his Snippets fresh off the press!