Economy – Can you remember when the Reserve Bank first had a go at VBS Mutual Bank? There were cries of racism (the Reserve Bank, really?) and so on. The latest is that several municipalities stand to lose some R1.5bn as a result of the shenanigans within that institution. One can but wonder what happened to those initially distraught?

NKC African Economics’ economic growth forecast’ for the first quarter of this year’ is zero, compared to 3.1% for the 4th quarter last year.

This had to come: Frontier Car Group, bankrolled to the tune of R1.1bn by Naspers, will be rolling out a one-stop service for the sale and purchase of used cars. Inspection Stations will vet cars, whereafter the vehicles will be disposed of via e-auctions coupled with financing, insurance and ancillary services.

The Ombudsman for Long-Term Insurance brought out its 2017 annual report. The least responsive long-term insurance company was that of Nedgroup life. The company which had received the most complaints was Old Mutual Life.

Our dysfunctional Msunduzi municipality suspended a number of officials in its rates department following on a meeting with conveyancers local Chamber some 10 days ago. This week past I went and queued for a rates quote now two months outstanding – I saw others complaining that they had paid quotes 3 months ago but had not yet received certificates. The harm suffered by residents who buy or sell as such that it has become a crisis which can no longer be ignored. Interestingly, the chap (a Dr nogal) had been in charge until very recently, has moved on to higher things; there to wreak further damage.

Usufruct: on a regular basis I encounter transfers of property from parents to children where the parents hold back usufruct on the property transferred. Colleagues dealing with these often use the full value of the property for transfer and tax purposes. When transferring that which remains after use rights to a property has been held back (generally referred to as the bare dominium) the real value of what is transferred is calculated according to a formula that has been in use for many years; this dramatically lowers the costs paid by the client and reduces the transfer duty payable. Aside from being wrong, not calculating the value of the bare dominium does one’s client no favours.

Another evergreen (dyspeptic) bête noir of mine, is one where sectional properties are transferred and, on requesting a levy certificate, one is told that by the owner (and, even worse, the estate agent) that the body corporate does not exist. BS: the moment a person other than the developer becomes an owner of a unit in a scheme the body corporate comes into existence automatically. All of these have bodies corporate which exist, but which are not functional. I believe that the current legislation precludes one from transferring a unit in a sectional scheme where there is no functioning body corporate. Aside from this the purchaser is entitled to a raft of protection which those who transfer such units simply ignore at their peril and to the prejudice of the purchaser.

Most irritatingly, when digging my heels in such matters I am told that there are others who do this all the time. At the best of times it is distressing to lose work to incompetents. To have to listen to their horns being blown, is infuriating.

IOL published the annual growth rates of average house prices in South Africa over the period 2001 – 2017. Interestingly, the eThekwini municipality leads in terms of value growth:

A law unto oneself? Do traditional leaders (in this case, read The King) have to consult with their communities before litigating on their behalf? Yes.

Wonderfully, traditional leaders doing their own thing, was termed village tinpot dictators by none other than Motlanthe! Presumably he no longer has to make friends!

In 2003, 40% of South African divorcees were white. By 2000, 642% were from African population groups. Women participate in the workplace and economy and are no longer dependent on their partners for their financial needs. It is said that the tradition of respect towards the man in the marriage, amongst blacks, is softening.

Two attorneys’ firms in the Eastern Cape have been exposed as having used a template for 57 applications against the Minister of Home affairs and the Refugee Appeal Board. One hopes that they are given short shrift.

A new schedule of Deeds Office fees will kick in on 1 July. If you have not yet received a copy, ask me.

I was asked an interesting question this week; whether the maxim of de bloedige hand applies to our trust. Our law has a well-established rule that one cannot benefit from one’s own unlawful act. This is expressed in estate law as the bloedige hand maxim. I cannot recall that I have seen a similar prohibition applied in trust law by our courts. Are there any readers who would assist?

Who cares! The healthy amongst us can probably expect to live into their 80s today. Another dire report on drinking some 5 or 6 glasses of wine a week, holds that this will probably make you live 6 months less. At 85 this is probably a blessing!

South Africans would enjoy first world standards, but the fact is that we just don’t have enough taxpayers to carry the tax burden that would deliver these. RABS (the Road Accident Benefit Scheme) has been in the wings for some years. The only real benefit those who stand to be benefited is that it redistributes benefits amongst others that don’t currently benefit. At the moment there are many who drink from the font of compensation other than those benefited which, in theory, diverts money from those who need it most to others who don’t. Unfortunately, RABS will ensure that deserving persons receive less. The intent of combating fraud, by placing the State in charge of a system wholly run by it, must be a pipe dream.

Ad hominem may be translated as to the person. An ad hominem argument is a fallacious form of argumentative strategy wherein the person and not the argument is attacked. In response to the Sygnia CEO having said that the Sagarmatha listing should not have been considered by the JSE, Rosemary Mosia, the deputy chairperson scathingly responded by describing her critic as one who runs what can best be described as a fourth-grade asset management company. This, from someone who has yet to list, is both a diversion and rich.

Ethics: I am part of a WhatsApp group in which there was a recent minor dustup about legal ethics and those in our profession who would appear flout these. Two weeks ago, this topic was addressed by deputy Chief Justice Raymond Zondo, who pointed out the distinction between ethics and the law: these overlap but are not the same. Ethics is an issue which involves us all: corruption cannot stand if the whole of society rejects such malfeasance. A member of the Ethics Institute commented that: “I don’t buy the argument that when something goes wrong it was one bad apple. When you look at it you realise how systematic it is and how it was perpetuated over time.”

Consider the following recent statement: “If I had done anything wrong, I would have suffered a guilty conscience” (Jacob Zuma).

Our former president is immersed in a welter of accusations and logically cannot be completely innocent of the accusations made against him. Yet there is a substantial part of our populace that still support him. Why? Our problem is not one of a few bad apples: our problem is a society where other considerations override ethics.

The heights by great men reached and kept were not obtained by sudden flight, but they, while their companion slept, were toiling upward in the night. Longfellow

Inspiring quotes are ten a penny: living to those ideals and inculcating these into others is what counts.

Getting away from the oft grimness of life:

The more wine I drink, the more enthusiastic I get.

I enjoy a glass of wine each night for its health benefits.

The other glasses are for my witty comebacks and my flawless dance moves.

“In victory, you deserve champagne. In defeat you need it.” Bonaparte 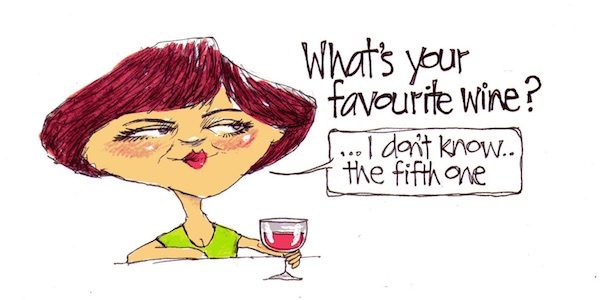