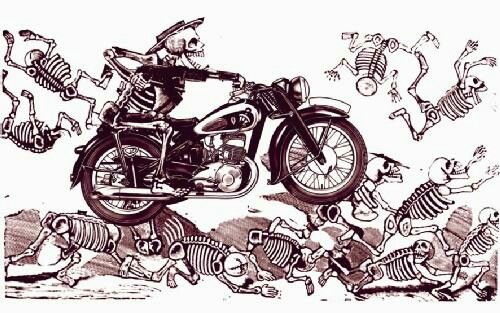 This will be the last newsletter for a few weeks: I shall be living it up on a dirt bike with my sons in Morocco, drinking mint tea (yes!). I strongly suspect that drinking mint tea the reason that Islam forfeited the pre-eminence it enjoyed in the Islamic Golden Age, in favour of the West…

By the time I write the following instalment, the general election will be history: Lehoha aptly refers to this event as having to choose between pots and kettles. You have to love this man.

Hiraeth: the Welsh equivalent of saudade or sehnsucht; a yearning to come home (okay, I confess, I have Welsh friends, but none of us are perfect). Coming home is always pleasurable – beer here is freely available! (I was interested to find that Namibia is ranked second in the world, when it comes to per capita beer consumption. South Africa isn’t even on the list! Is it just me?)

On the same tack, the Enterprise Observatory of SA reports that 83,000 firms had been lost to SA business over the last 10 years. The SARS company income tax data shows a shrinkage in the financial and business services sector of firms that had submitted tax returns by 37%, down to some 139,000 in 2016 from 222,000 in 2007.

The IMF has lowered our projected GDP from 1.4% to 1.2% for this year. This puts our country amongst the worst performers in sub-Saharan Africa. In fact, we will be growing at less than half of the average sub-Saharan rate of 3.4%. Only that cesspit, Angola, will be doing worse.

The IIF reports that we are experiencing net outflows of non-resident portfolio equity. It appears that this trend is driven by uncertainty about our sovereign rating; this situation is expected to better next year.

Further afield, there is a drumbeat of warnings about a looming worldwide recession. Brookings-Financial Times Tiger indexes, which track the global economy, reflect a decline in growth momentum in virtually all the world’s major economies. This trend is ascribed to weak business and consumer sentiment, geopolitical uncertainties and trade tensions.

The KZN Graduate School of Business and Leadership had received a report about three years back that this school was not up to scratch, primarily owing to inexperienced lecturers. The University has committed itself to fix this. How does one do this without firing half the staff? This sounds just like the Stormers learning lessons from each game that it loses; by now these guys should each have a PhD in rugby. Just don’t go to that school.

I was copied into a note, written by an occupational health provider, that one cannot declare a person unfit for duty, based on one positive urine test that does not differentiate between psychotropic and non-psychotropic use of cannabis. If this interests you or I can provide you with the contact particulars.

The FNB Estate Agents survey holds that estate agents do not expect a further weakening in the balance between demand and supply of residential housing for this year.

The average time of homes on the market is still at some 15 weeks.

The percentage of sellers having to drop their asking price to strike a deal, stands at around 95%. Downscaling because of life stage, is still the biggest reason for selling at 23% of all sales in the previous quarter. Immigration-driven sales amount to some 14%, up from 10% in the fourth quarter of 2018. In fact, immigration-driven sales have doubled in the past two years and are more prominent in upmarket segments. This speaks for itself – what country would want a bottom end of any population as immigrates?

A footnote reports that Zimbabwe is to start paying some $17.5m to farmers, who lost their land in the Mugabe’s land reform programme. This development is owing to pressure coming from the West and Zim seeking to mend ties.

Can a dead employee be reinstated if unfairly dismissed? Apparently; but only up to the date of his death. https://www.golegal.co.za/deceased-employee-reinstatement/

I invite you to read the Cherry Tree judgement in which Willis J ruled on peacocks, cherry trees and encroachment, set against the backdrop of some judicial humour. The case is not new but certainly makes for pleasurable reading, given the dryness of most judgements.

Would you fund a law student if he agrees to pay back a percentage of his monthly salary for (in this case 8 ½ years)? Take a look: https://www.bloomberg.com/news/articles/2019-04-09/college-grads-sell-stakes-in-themselves-to-wall-street

No one leaves home / unless home is the mouth of a shark.

You only run for the border / when you see the whole city/ running as well.

(Shire is a British-Somali poet whose evocative stanza has become the rallying cry for refugees. It is said that emigration is driven by inequality and, without this being addressed, the problem will persist.)

I don’t generally get involved in yellow page stuff, but this is too good to pass by: The Duchess of Sussex has eschewed the Royal Household gynaecologists (we are now talking the creme de la creme in high-risk births) in favour of her own team – the Queen’s worthies will be standing by in case her own doctor doesn’t make the cut.. What is wrong with this woman? (You gotta feel for Prince Harry)

I quite enjoyed Ms Saville (a deputy editor at the Witness) likening the stampede of ministers, inexplicably swooping to intervene in public affairs, that they had known about for years, to caped crusaders. Imagine the Windrush that our well-fed politicians would bring with them…

Another lovely BS statement by those who govern us, on dealing with foreign embassies, is that we are not xenophobic. I agree. We just don’t want foreigners employed here and we prefer killing foreigners to locals.

Apropos the election: the first picture of a black hole taken by scientists confused me; I had wrongly assumed this was a picture of a politician.

My psychiatrist says that I suffer from Xenophobia.
Must have caught it from some foreign b*stard.