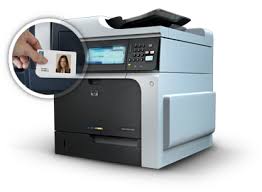 Most thieves look for points of least resistance to get at your goods. They love easy marks, such as open doors and windows, unattended purses or keys left in automobile ignitions.

When securing a network, computers and servers tend to be the first technologies to be ticked off within any IT infrastructure, and most companies ensure that some security software is active on servers (including email), workstations and mobile devices.

It’s the “behind-the-desk technologies” like printers that are often forgotten.  In fact, in a recent Spiceworks study conducted on behalf of HP¹, only 18% of IT professionals surveyed consider printers to be a medium or high risk for security threats or breaches. This is despite the fact that, according to the Ponemon Institute, 92 per cent of Forbes Global 2000 companies reported data breaches in the past year, with the average annual cost to resolve a cyber-attack amounting to $7.7m.
Printers it seems are security blind spots, which can leave organisations’ networks and data dangerously exposed.
The risk of the unsecured printer
In March this year, the printers at 12 US colleges were breached. The result? A stream of racist hate fliers spewing into printing trays. And the culprit? A hacker who had identified 29,000 printers that were connected to the Internet and could be exploited through an open port and then automated to complete any task he chose.
But the hacking of network connected printers doesn’t stop at rogue print jobs.  For example, cyber attackers can use printers to transmit faxes, change a printer’s Front Panel readout, or settings, launch denial-of-service (DoS) attacks to lock it up, retrieve saved copies of documents or intercept data as it’s electronically transferred to the printer.
Most worryingly of all, an unsecured printer is a gateway to your network, and can give hackers access to sensitive, private or confidential data.  In one case in Denmark, this resulted in a company being held to ransom, after a hacker entered through an unsecure printer and froze the company’s entire IT system.
The threat of cyberattacks will continue to grow as global data mushrooms and the number of connected devices/ entry points grows. In fact, in 2014, according to Forbes, companies reported a 48 per cent year- on- year increase in cyberattacks on their networks.  Yet security breaches or data loss can also occur from internal threats to unsecured printing. For example, sensitive documents being stolen from output trays or accidently being seen or picked up by the wrong person.
The changing regulatory environment
As well as cyberattacks and employee fallibility, regulation is also compelling companies to think differently about their printer security.
The EU General Data Protection Regulation (GDPR) now means much higher fines for any company who fails to keep EU citizens’ personal data safe- regardless of where that company is based. For some breaches of the GDPR, companies could receive fines of up to 4% of global annual turnover or €20m (whichever is higher).
So when faced with external and internal threats to printer and data security, what can you do?
The 3Ds of printer security: securing the device, data and documents
Any failsafe print security plan needs to address the document and data but that’s not enough as the device is at risk as well.
Securing the device
Reducing the threat of malware and cyberattacks is key to securing the device. At HP we’ve just designed our latest portfolio of HP LaserJet and PageWide Enterprise printers to offer increased protection against these threats. For us, this means detecting and thwarting malicious BIOS attacks, (achieved with HP Sure Start which offers the same BIOS security protecting HP’s Elitebook series);whitelisting which helps ensure only known, good firmware can be loaded and executed on a printer; and run-time Intrusion Detection, providing in-device memory monitoring for malicious attacks and detecting anomalies.
Securing the data: authenticate, encrypt and monitor
As well as securing printers from external threats, you need to protect the data. This should include user authentication when printing from either a PC or a mobile. This ensures that any user identifies themselves prior to using printers or changing printer settings. This can be done through PINs or other verifications and can eradicate the risk of the wrong person picking up a document.
Data encryption protocols can also prevent jobs/documents from being intercepted while travelling across a network or within the memory on the printer. Using advanced security controls and authentication through PINs, biometric solutions or smart cards that have to be used before access is granted, can also secure a device’s control panel.
The latest HP Enterprise printers with LaserJet and PageWide technologies will also automatically monitor for attacks, send information to the company’s security event monitoring system and initiate self-healing through a re-boot if the device is attacked, further protecting the device.
Securing the document: compliance and anti-counterfeit
The use of Managed Print Services solutions, like the ones HP offers, can also help you develop and implement a security plan that keeps apace with changing regulations and threats. This can also include pull printing and workflow solutions that can eradicate user behaviors that put hardcopy documents at risk. Pull printing works by allowing a print job to be stored on a protected server and only activate it once the sender of the print job identifies themselves at the printer.
Printers installed with physical locks and shielding on input trays can also help prevent theft, loss, tampering or forgery of hardcopy documents. According to the Ponemon Institute² nearly 65 per cent of breaches are accidental, or due to employee negligence or business process failures, so pull printing and physical protection could eliminate behaviors that may be putting your data at risk.
Defending your network
Improving the security of networked printers involves securing devices, data and documents. It’s only by adopting this kind of comprehensive approach that you can improve protection against malicious hacks, accidental internal breaches, and the reputational and financial ramifications of regulatory non-compliance.
To assess your printers vulnerability take the free HP Secure Print Analysis questionnaire.

POPI and the printer