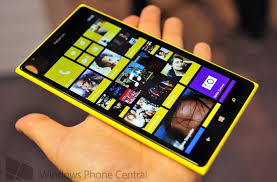 Nokia has announced the arrival of its first 6-inch Lumia smartphone in South Africa, the Nokia Lumia 1520. The Nokia Lumia 1520 is now available in black, yellow and white on contracts starting at R449 per month. The new large screen Lumia is joined by three affordable smartphones in the shape of the Nokia Asha 500, 502 and 503, all of which feature ‘frost’ design and new Asha OS featuring Fastlane.

The new Asha range is expected to arrive in South Africa starting in March 2014.

The Nokia Lumia 1520 comes with a 1080p Full HD screen with an enhanced start screen featuring an additional 3rd column of live tiles, allowing people to get to their favourite apps faster with less scrolling. Thanks to the 20MP PureView camera with optical image stabilisation, oversampling technology and zooming capabilities, people can easily capture and edit high quality pictures and tell better stories. The Nokia Lumia 1520 brings personal stories to life with Nokia Storyteller and Nokia Camera, and the bigger screen enables a fantastic Microsoft Office experience.

“We are significantly expanding our Lumia portfolio in more ways than one with the Nokia Lumia 1520,” said Shaun Durandt, Nokia’s GM for South Africa. “With our latest imaging innovations and the best from Microsoft brought to a new form factor, we’re helping people to capture the world around them and do more on the go.” 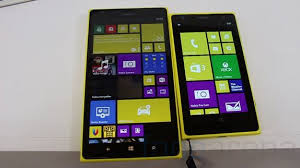 Above: The size comparison between Lumia 1520 and the Lumia 1020

Telling stories better on a large screen
Creating the best high quality images gets even easier with Nokia Lumia 1520 and its 20MP PureView camera with optical image stabilization. Building on the imaging innovations and experiences introduced with Lumia 1020 and now optimized for a larger screen, the Lumia 1520 includes the Nokia Camera app. Nokia Camera integrates the most popular imaging modes – Pro, Smart, and video – into one seamless interface.

For the first time, PureView imaging meets HERE maps with the launch of Nokia Storyteller merging the two signature Lumia experiences together. Relive memories in an interactive way that automatically integrates pictures with location information into a chronological picture journey on a map.

“We have expanded the Asha family with a trio of smartphones that offer consumers a choice of handset that suits their budget, each with stunning design, great social apps, and new imaging experiences,” continued Durandt.

Nokia Asha 503 is a 3.5G device, and pushes the boundaries of affordable smartphone innovation with a unique layered design and a scratch-resistant, curved Gorilla Glass screen. With a five megapixel camera and LED flash, the Nokia Asha 503 provides a smarter imaging experience through ‘swipe’ and one-touch social sharing. The Nokia Asha 503 has an estimated recommended retail price (RRP) is R1199.

The range features an innovation known as layered design, achieved using the ‘dual shot’ technique which is unique to Nokia. It combines an inner layer of bold, bright colour surrounded by crystal-clear transparency. The combination adds a distinctive look to the phone’s monobody design, as well as durability. The high-end design is a clear differentiator, as are the craftsmanship and attention to detail.

The new Nokia Asha range bring a fully redesigned user interface. Swipe is the main gesture for navigating the phone – whether answering a call, viewing notifications or closing an app. Swipe also activates the built-in camera. Just swipe up from the lock screen to start the camera and touch anywhere on-screen to take a photo. The camera experience is also more social, with the option to post an image to Facebook or Twitter with just one touch.

Fastlane is the unique, second screen that acts as a shortcut to the phone’s recently accessed apps, features and content, as well as future activity, such as calendar appointments. It’s the fastest way to access an app in its last state, as well as being the social hub of the Nokia Asha range. Deeper integration with social networks now enables live updates, which alerts people with notifications on Fastlane. By clicking on the Fastlane item with new notifications, people will be directed to the relevant post, so they never miss an important update.

Nokia also took the opportunity to announce its sponsorship of World Design Capital 2014, Cape Town. Nokia’s design heritage spans many decades, designing and manufacturing handsets for millions of consumers around the world, making Nokia part of a truly global dialogue.

About Nokia
Nokia is a global leader in mobile communications whose products have become an integral part of the lives of people around the world. Every day, more than 1.3 billion people use their Nokia to capture and share experiences, access information, find their way or simply to speak to one another. Nokia’s technological and design innovations have made its brand one of the most recognized in the world. For more information, visit http://www.nokia.com/about-nokia