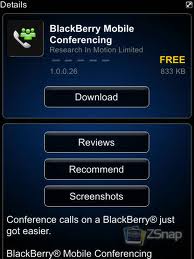 Research In Motion (RIM) makes it even easier for customers to manage conference calls on their BlackBerry® smartphone with the release of BlackBerry® Mobile Conferencing version 2.0. This innovative and popular free app includes a number of enhancements, such as the ability to automatically turn an email thread into a conference call using the user’s conference bridge details.

•    Turn An Email Thread into a Conference Call – BlackBerry Mobile Conferencing helps users instantly schedule a conference call from an email thread, with just a few clicks. The sender and recipients of the email are included as meeting attendees, the email subject becomes the user’s meeting subject and part of the email message is automatically copied into the invite for reference. Users can also add conference call details from a stored profile.

•    Automatic Detection of Conference Call Details – Conference call information found in meeting invites in any calendar on the user’s BlackBerry smartphone is automatically recognized and set up for easy dial-in at the appointed time, helping the user stay organized and on time. In version 2, the engine that recognizes conference call details has been enhanced for improved accuracy.

•    Conference Profiles Increased to 10 – Users can instantly add preset conference call details to almost any meeting they schedule by selecting from up to ten stored profiles.

•    Private Moderator Codes – Users can also keep moderator codes private. Invites sent using a preset conference profile include just the information participants need to join the call. If conference information found in a meeting invite is the user’s, the app accesses the stored profile to dial the user in as the moderator. The feature allows a meeting organizer to leave out the moderator code in an invite for privacy, without sacrificing the convenience of “Join Now” as the moderator, when the call arises. 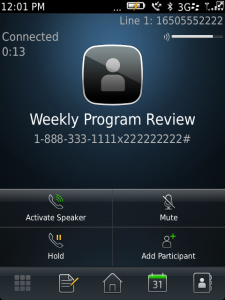 About Research In Motion
Research In Motion (RIM), a global leader in wireless innovation, revolutionized the mobile industry with the introduction of the BlackBerry® solution in 1999. Today, BlackBerry products and services are used by millions of customers around the world to stay connected to the people and content that matter most throughout their day. Founded in 1984 and based in Waterloo, Ontario, RIM operates offices in North America, Europe, Asia Pacific and Latin America. RIM is listed on the NASDAQ Stock Market (NASDAQ: RIMM) and the Toronto Stock Exchange (TSX: RIM).