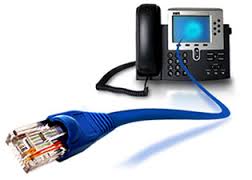 Soon half of all desk phones will be IP-based. It is generally agreed that all voice calls will in time be delivered over Internet Protocol-based (IP) networks. Just how far we’ve come on this journey may come as a surprise to some.

The position in 2012
BMI-TechKnowledge reports that nearly a third (28%) of phones shipped in 2012 were IP-based. In truth, this figure may soon, if not already, be closer to 50%. The underlying reasons for this are two-fold:
• The high growth rate in IP handsets (from 37 000 handsets in 2007 to 130 000 in 2012, or 251%).
• BMI-T’s study only covers the mainstream PBX vendors, and further excludes hosted PBX deployments and third-party phone shipments. If all vendors are included, the picture may already be significantly different. 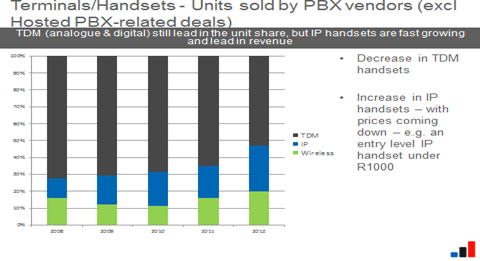 VOIP extensions vs. trunks
What the research does not indicate is whether the IP phones in circulation are in fact being used as IP phones on outgoing SIP trunks, or merely to initiate calls between extensions (whether on the same premises or in a distributed environment such as a retail chain or bank).

There are excellent reasons for doing either. Migrating to a SIP trunk incurs dramatically lower installation costs than a PRI link. While the monthly cost is the same if provided by Telkom, other telcos including Connection Telecom can offer it at a much reduced monthly rate.

But companies that prefer to remain on a traditional TDM trunk line – perhaps due to a good deal negotiated with Telkom – can still upgrade to IP internally. In such a case a media gateway (or PBX, if the company has an IP enabled one) can do the conversion from IP to TDM and save costs on calls.

Starting off with IP telephony on the inside may seem pointless and even lacking in confidence, but it has several benefits.

Future-proof
Initially this may be done in order to future-proof any new investments in customer premises equipment (CPE), including desk phones, PBX, a soft switch or hosted solution.

IP is the communications technology of the future, so companies can invest in the technology now without fear of it being obsolete later. The fact that it can be made to ‘talk to’ legacy equipment makes this kind of upgrade not just possible, but the only sensible choice for companies wanting to sweat their assets.

Unified comms
Alternatively, companies may be after the functional advantages of unified communications (UC). Even if they only really expect to fully utilise or activate some or all of it later, such a step paves the way.

Cost savings
More likely, though, they may simply be hoping to save some money by going down the IP path. This is true to a greater or lesser degree, depending on their telephony profile.

Large multi-site organisations, such as the abovementioned retail or bank, stand to gain most from SIP trunking across their national branch network. If networked voice is used within the company too, the company can, in addition, save on PABX costs too. Rather than maintain one at every site, they can simply install a media gateway device. The savings in a scenario with tens or hundreds of branches are staggering.

Smaller companies can adopt VoIP too, but they tend to be after the leading-edge functional advantages, and possibly future cost savings.

Most get it
The rapid growth of IP phones in business is a fair indicator that most companies are seeing the benefits of this enabling, efficient and future-proof technology. As companies grow and replace legacy PBXs, IP phones will further increasingly be used over IP connections.