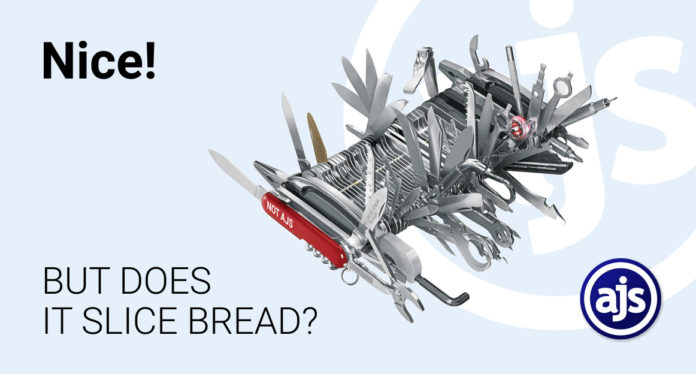 Don’t be fooled by bells and whistles…

Have you bought a new cellphone recently? It has every type of app possible – from converting currencies to translating languages to shopping lists that automatically (almost) do your shopping for you. To apps that measure the amount of steps you take per day or measure your sleeping patterns, providing (detailed) advice on how you can maximize on your sleep.

Feeling stressed? There’s a meditation app that plays an array of Zen music to switch off to.

But there is just too much on one phone. For one user. So much software. So many apps. And basically all you really want to do is be able to make a call. The basic function of a phone. Or send a message, if you don’t feel like chatting.

It feels like you are constantly bombarded with unnecessary apps and seemingly innocuous “special” add-ons making actually using the phone (and constantly updating all the apps on the phone) both complicated and rather tiresome.

I mean, I updated yesterday – come on! Just work for crying out loud!

Is it all actually necessary (besides the doing grocery shopping for you part. In my world that’s necessary)?

But this frustrating situation is not limited to your mobile devices. No.

Not the title of a low budget horror movie, the feature creep “phenomenon” is actually a real thing.

“when you add excessive features to a product that make it too complicated or difficult to use. Any additional features that you introduce in to your product add to the complexity of your design. In turn, this can diminish the usability of your product”.

The UX Collective refers to feature creep as software-bloat, scope creep, creeping featurism or featuritis (sounds like a bit of a nasty virus there). It basically occurs when extra features go beyond the basic function of a product. Ultimately resulting in the design of a product for a feature-led experience rather than a user-centred one.

I.e. Your needs are not actually being taken care of.

And if you are like most people, you only use a few of the features available in most of your products, leaving a myriad of options untouched.

What’s the point of these add-ons really?

But are the add-ons really that bad?

By and large, feature creep is not entirely a bad thing. After all, most of the time, you can just ignore the features you don’t use and focus on the ones that you do. Mostly.

However, the process of adding on of these useless features leads predictably to a software bloat – resulting in software becoming slower and more resource-intensive with each version, eventually crippling the overall user system. Kind of like putting on a large amount of weight – suddenly you have less energy, are unable to exercise according to your usual regimes and basically feel bloated, heavy and unattractive.

Same thing here. But with software.

And this proliferation of unnecessary features is the symptom of most software developers’ incessant over-complication of products and their overwhelming special features. Like providing extra features will make their core focus more attractive, more useful. Wrong!

And that’s not the right thinking….

It’s also key to keep in mind that the adding on of too many features can actually adversely affect commercial value, customer loyalty, and brand reputation of a business. So it’s important that the product actually performs the job it was originally designed for…. Or risk losing clients along the way.

Keeping in mind the above, it begs the question – “Are software companies (mistakenly) under the impression that they really understand what their clients want?”

As is evident, feature creep is basically the result of poor planning, insufficient product strategy and incorrect priorities – not focusing on what the clients want or need. Typically, new features are added after the fact and are largely out of scope. In other words, superfluous to the purpose of the product.

A perfect example of feature creep can be seen in the likes of social media platforms, like Facebook.

According to UX Design –

“Facebook is a particular example of where feature creep affects user experience. The social media platform was intended for connecting people, but this simple idea has mutated into something overcomplicated and even unethical. People now find themselves painfully negotiating their way through a wall of adverts, unreliable news sources, and meaningless memes.

While some organisations have good intentions of adding user-centred features, they often don’t listen to what their customers really want”.

And that is the crux of the matter really.

A product, software suite or even an online platform that starts out with every intention of giving customers what they really want only to find that a once useful product has mutated into something shiny and complicated but doesn’t actually work.

And that’s not good enough.

Stepping in politely is legal tech….where legal tech companies need to be asking their clients the following question –

“Are you using all of the features in your legal software?”

Because if you aren’t, perhaps you need to reassess why you purchased the software in the first place.

When assessing (sometimes costly) legal software, you want to find a system that does everything you need. And nothing you don’t. As simple as that. We get it.

But when shopping around, clients are often fooled by and convinced in to purchasing software packages that have drifted (far) away from its core focus, offering every bell and whistle you can (modestly) think of. But not providing you what you actually need.

And we (obviously) caution you against that.

Because being blown away by all the other additional (and nonessential) features that a software company can provide is not how one should approach the incorporation of software into their business.

Remember, you are purchasing something for its core purpose and what it can actually do for the betterment of your business. Not for its fancy “extra’s” that really amount to nothing but white noise.

So, how do you separate the core purposes from the feature creep?

How does one (who is perhaps not trained in the sphere of legal tech) judge useful features from the “bloat”?

It really comes down to being ruthless. Focusing on the actual problem you’re trying to solve. Like your legal work – drilling down to the core of the legal question at hand.  And as you would when compiling an argument, you need to do the same with asking yourself – what is core for your business and what is bloat.  Ask yourself (as many times and you need to) why you are purchasing a certain software package? If you need to streamline and simplify your legal practice, look for software that will do that. If you only need to review data for effective case management, don’t worry about the production of court-ready documents. Stay laser-focused on your actual purpose. Weigh up all the features offered by various product suites against the problem you have. If a feature isn’t going to help you solve your problem, you (most likely) don’t need it.

One or two unnecessary features may not impede usability or slow your operating systems down completely. But beyond that, you are paying for bells and whistles and not functionality. And you don’t need them.

Don’t waste time and money on software that’s designed to solve a problem you aren’t currently experiencing. If you remember to pay attention to usability rather than the attractiveness of “special” features, it’s not hard to avoid feature creep — at least not in your legal software.

And the overarching point here really is this – you want a company that actually listens to what you want. You want to be heard.  Not offered all types of extras to make a product seem more attractive. You just want the product to do the job you need it for.

In closing, Dan Olsen, the author of The Lean Product Playbook, stresses the importance of focusing on core features in his book:

“Swiss Army knives are incredibly useful, providing a set of tools to address a wide range of needs all in one convenient package. But at some point, as you add more and more tools, a Swiss Army knife gets wider, heavier, less usable, and less valuable. Focus is critical when defining a new product.”

Don’t be fooled by all the extra tools that the Swiss army knife can provide. Having something be bigger and more cumbersome, just because it can be, doesn’t make it more valuable. At least not to the functionality of your business. It just makes it more complicated.

So, “buy a knife” that can do what it is actually designed for – simply cut.

Get in touch with AJS today to find out more about its core product offerings. Because “AJS takes client requests very much to heart. Making up 80% of our overall product development”. So, you can be rest assured that we will have your best interests at heart…