Last year, Smith Tabata Buchanan Boyes (STBB), one of the leading conveyancing firms in South Africa, began investigating the possibility of upgrading their conveyancing software. They felt they needed a system that not only offered the flexibility to satisfy their unique demands, but could also cater for their multi-branch environment running over a Wide Area Network. 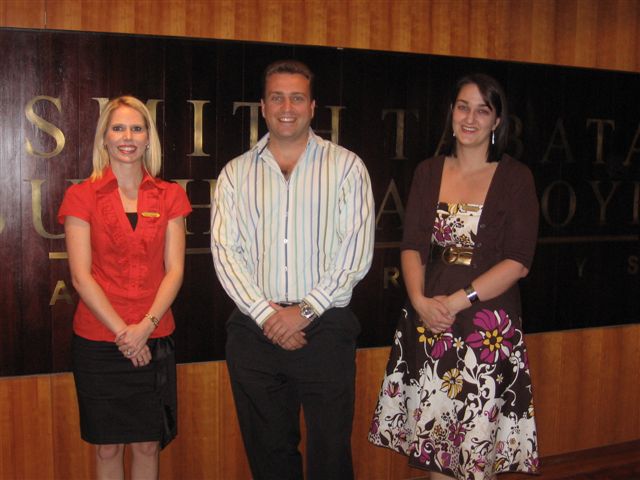 In the picture are from the left, Saron Vazladelis – Sales Director at LegalSuite, Brent Mackay Team Leader at STBB and Anrie Eastes – Chief Operating Officer at LegalSuite.

They also felt it necessary to move to a SQL-based system which would handle their extensive data requirements, and allow them to query the data and generate reports “on the fly”. They also wanted a program that allowed them to design their own business processes, i.e. they wanted the ability to customise the actual workflow of the program so that they could track the progress of each matter based on milestones and time frames they chose. They also wanted a system that allowed them to report back to clients and other stakeholders in an automated, yet intelligent, manner. The ability to customise the built-in documents, emails and SMS’s were also a high priority. STBB also wanted a software supplier that provided good backup and support and were willing to listen to their ideas and adapt the program if necessary to improve its usefulness to its users in general. These were some of their goals and a team led by Brent MacKay was assembled to identify if such a program existed.

After an extensive analysis of the various conveyancing products available locally, LegalSuite was chosen as the most likely candidate. The team from STBB spent a further 14 months examining every aspect of the program – its capabilities, flexibility, features and user friendliness. Needless to say, LegalSuite came out tops in all departments. After requesting a number of minor changes to the program, LegalSuite was accepted by STBB management as their software of choice. An implementation plan was put into place and the process of converting their extensive data from their legacy system began.

“This proved to be quite a challenge”, says Rick Jordan of LegalSuite. “We had to consolidate data from separate stand-alone databases into a single SQL database. Since each STBB branch had its own independent database, there were inevitably a number of Matters with duplicate file references. We used some clever techniques to identify and resolve the duplicates before writing them to the SQL database which is actually a tribute to the power of SQL Server and it’s scripting language.”

The SQL script to convert the data took three months to write and the data was finally converted on Friday 24th April 2009. The program was installed, implemented and commissioned over the weekend and STBB Helderberg Branch went live on Monday 27th April 2009. After a successful implementation at the one branch, STBB decided to press ahead with the implementation plans for their remaining branches.

“We are very pleased with results so far”, says Brent Mackay, team leader at STBB. “Our users are still in the foetal stage of adopting LegalSuite and will soon became familiar with the new system. We have had to iron out the inevitable teething problems, but LegalSuite has been extremely helpful in this regard. Overhauling our entire software system was a big step and somewhat of a culture shock for STBB, but we felt we needed to have a system in place that could provide us with the tools to manage our multi branch environment without diminishing our ability to enhance customer service levels. While LegalSuite is a product that will service our needs in the present, it also shows the required promise to adapt and grow with us. We believe LegalSuite has all the features and tools to accomplish this and look forward to a long and mutually beneficial business relationship with them.”

“We are very proud to have a firm of STBB’s stature as one of our clients,” says Anrie Eastes, Chief Operating Officer at LegalSuite. “Their vigorous analysis of our program and its competitors, and their ultimate thumbs up to LegalSuite, indicates that we are doing something right and that we have a product that now rivals, or even surpasses, those available in South Africa, especially for bigger firms. We feel that other large firms may now see the way clear to follow STBB’s lead and consider LegalSuite’s conveyancing as a viable alternative to their existing systems.”