As cloud-based PBX deployments show accelerating growth, a fascinating sub-plot is unfolding, with public, private and hybrid installations all finding favour*. The question is – which configuration will gain preference as the market matures, and in what circumstances?

“From our point of view, public cloud installations are preferred in more than 56% of deployments, and private and hybrid installations in 22% of cases respectively,” says Rob Lith, Director of Connection Telecom.

“When measured by extensions, the picture is reversed. Close to 60% of our extensions are private, while 12% are hybrid, and 28% public.”

A clear inference can be made from this, he points out. “Large companies, which represent a small base of our install base but the majority of extensions deployed, prefer private hosted solutions, while a large number of smaller customers, representing a comparatively small number of extensions, favours public.”

He says large companies prefer private cloud deployments because it allows them to leverage their considerable investments in high-end network and data resources and equipment, thus retaining control over the running and support of their deployments.

Lith reveals that Connection Telecom’s hybrid install base is made up of a small but growing base of large customers, whether measured in customer numbers, sites (which may involve multiple branches or chain stores) or extensions.

“These customers are planning to grow their solution footprint significantly, so in extension numbers they might in time get close to the number of private extensions out there for us.”

Research has shed further light on this question, in the form of the ITWeb Unified Communications 2011 user survey.

The private-public split is therefore 51%-16%, with no provision for hybrid implementations. 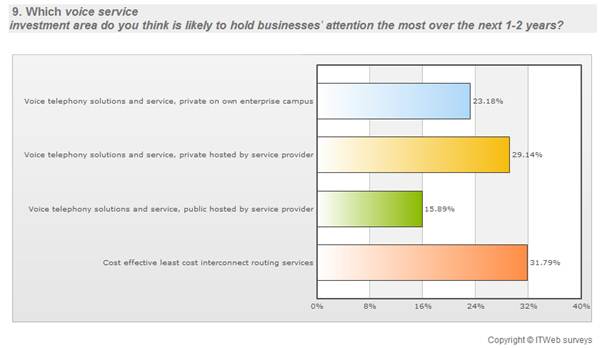 While it is impossible to compare the findings from ITWeb’s user-centric survey to Connection Telecom’s customer, site and extension metrics, the ITWeb sample base provides broad correlation of Lith’s observations.

Close to 25% of respondents of the survey represented small companies, while nearly 75% were from large enterprises. In that light, it is not surprising that a majority felt private installations were the way to go.

Lith says as cloud PBX adoption continues to accelerate, the above findings appear indicative of a market-wide trend. “Depending on the customer split of a particular service provider, we think it is quite predictable what the public-private-hybrid weighting will be.”

Connection Telecom was founded in 2004 as a pioneering independent provider of proven carrier-grade IP PBX solutions to Southern African businesses. Since then, it has built on its telecommunication experience and grown its communications portfolio to include on-demand call centres, rapidly implemented and flexibly provisioned at low cost to offer speed to market to its customers, and introduced analytics to track call patterns and costs.

Connection Telecom provides an end-to-end communications service that straddles voice termination, routing, hosting and management, and the company has had much success in creating zero-rated call communities. Its solutions operate in physical as well as virtual settings, hosted on- or off-site in the client’s environment or its own fully-redundant data centre.

The Telviva family of enterprise PBXs and other products are aimed at enterprise customers and smaller businesses, and are suited to vertical industry applications. Feature-rich, managed and open (extensible), these solutions allow freedom of choice in handsets and add-ons, and a low total cost of ownership. The company has offices in Cape Town and Johannesburg with on-site support in 28 locations. Its major clients include Engen Petroleum, FNB, Lewis, RMB Asset Management, UCS, Old Mutual Finance and Vox Telecom.

ICT industry heavyweight and Internet specialist Rob Lith has been involved in the industry for the last 20 years. Coming from a strong sales background and with a lifelong interest in technology, Rob has an in-depth knowledge of Internet markets, technology and products. He sees VoIP, location based services and presence as the “next wave” of technological advancement. Rob started out in the retail sales business in London in 1978, returning to South Africa to join Compustat in 1989, soon moving up to Durban to head up its KZN branch. He found a like mind in Steve Davies, who became his long term collaborator. Rob extended his knowledge of the SA technology and Internet business at Internet Africa (which became UUNET, then WorldCom, then Verizon), before striking out on his own in 2003 to co-found Connection Telecom.