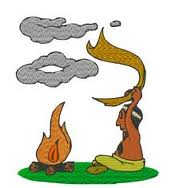 Communications technology has made astounding advances over time, and yet has not been allowed to deliver on its promise of bringing information to areas where it has the most potential for change and progress.

Where it all began
We generally think of Alexander Graham Bell when we consider the origins of telecommunications.

In reality, we have to go back to early history to track how people first conveyed messages over long distances, including the Native American system of smoke signals and African drums.

Early advances
We mustn’t think of these early ‘telephones’ as lacking in sophistication either. For instance, the pitch of the hour glass-shaped talking drums from West Africa can be regulated to mimic the tones and stresses of human speech!

In 1792, a French engineer, Claude Chappe, built the first visual telegraphy system (or semaphore telegraph) between Lille and Paris. It signalled information visually, by means of pulleys that turned beams of wood.

Two years later, a Swedish engineer, Abraham Edelcrantz, invented a system that relayed information from Stockholm to Drottningholm using shutters only, improving on the speed of Chappe’s system.

It wasn’t until 1878 that the first commercial telephone services were set up, based on technology patented by Alexander Graham Bell.

Another popular misconception is the notion that videoconferencing is a modern invention. The concept of video telephony was first popularised in the late 1870s in both the United States and Europe, and the basic sciences that permitted its very earliest trials took just 50 years more to be discovered.

The modern converged era
Only in the 1960s did researchers start to investigate packet switching — a technology that forms the backbone of modern communications.

Packet technology would allow chunks of data to be sent to different computers without first passing through a centralised mainframe. This was an immense breakthrough, as it made the idea of the Internet and modern communications possible.

Unrepeatable, unpredictable change
The current industry leaders of the communications era have lived through an immensely exciting wave of change.

From the telex to the rotary dial phone to the mobile smartphone, they have traversed a mind-bending journey involving stupendous and unpredictable change, ending up with the current Inter Protocol-based converged communications ecosystem.

Not one of the developers of these technological milestones could have had any idea of the unlimited possibilities ahead, or the disruption to their world.

And it’s still going
The greatest of these has undoubtedly been packet switching. It is a game-changer of such sweep and magnitude that it can probably not be repeated for another lifetime.

In fact, packet technology remains the technology of the future, as widely varied data formats continue to converge on this bearer technology, and new applications and possibilities are discovered for it all the time.

Parallel revolutions
Alongside this extraordinary evolutionary path of networking technology is the massive proliferation of data – in storage and in transit. A necessary corollary of intelligent, versatile, resilient packet-based networks is therefore a parallel increase in capacity of the conduits that transport data, and of the processing power of networking equipment.

This has been achieved, and makes up the ICT industry’s end of the bargain. Moore’s Law – the observation that the number of transistors on integrated circuits doubles approximately every two years – has not slowed since 1965. When fibre optic transmission first started with single light capacity, nobody could have foreseen that the introduction of many colours to transmit on would increase capacity to 15 terabits per second in 2009, and 1.05 petabits per second on 12 core fibre in 2012.

If it were up to technology alone, networked communication would therefore be striding ahead at breakneck pace, bringing untold information riches to places where it’s most sorely needed – disadvantaged schools and clinics, national priority research and commercial endeavour.

Stifling commercial interests
With this amount of capacity available and the wealth of fibre networks that have been rolled out in recent years, it is a wonder that take-up in the market has been poor.

It is certainly not for lack of capacity or future potential of the technology. Instead what is holding back widespread adoption is the well-publicised telecoms legacy of perpetuating historical bandwidth scarcity, thereby increasing demand and driving up cost. By quite simply making products with small increments available at high prices, the perception is maintained that there is a shortage, justifying high prices.

It is going to take innovative companies with vision and courage to further disrupt the market, shake off the accepted limitations placed on us, and liberate telecommunications. The only thing this new breed of service providers needs is higher capacity over the last mile from network providers. Only in this way will the promises of vastly improved communication succeed in improving education, medical and community services, as well as the business interests that serve them.