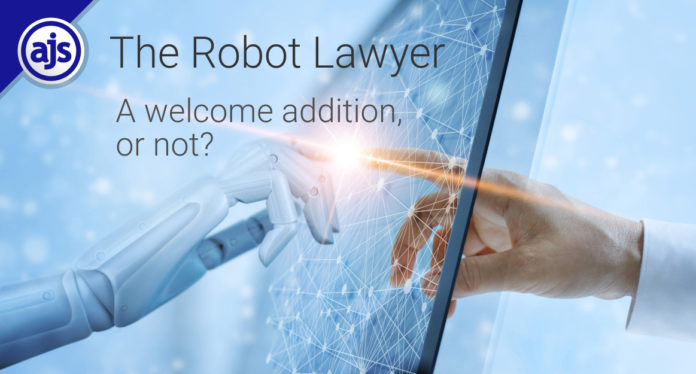 A welcome addition, or not?

Don’t freak out. This is not a yes or no discussion. It is a little bit more technical and a lot more complicated to be that simple.

With the way the world is moving and at the speed with which all businesses are required to systemise their operations in order to run optimally, effectively and efficiently, the topic of robot lawyers comes as no surprise.

Especially given the expectations now placed on businesses by both staff (who have come to expect the support of technology in the advancement of their careers) as well as clients (who expect their service providers, like law firms, to be as technologically apt as they are) to be forward thinking and properly prepared to take on more work and produce results at a quicker pace for less cost (and less time required by staff to repeat menial tasks).

Having chatbots, Artificial Intelligence (AI) or robots take over certain roles that human lawyers and their support staff historically performed seems almost like a certainty.

But this is by no means a nod to the “naysayers” who believe that the “golden age” of the human lawyer and their respective multi-partnered law firms has come to an end with the inevitability that Robot Lawyer LISA would take over their jobs.

However, it does sort of make one think of Lord Darth Vader’s Imperial March and the “Death Star” seemingly hanging ominously over our heads.

Or so it would seem

“With the increasing “threat” that artificial intelligence (AI) will make lawyers obsolete, you have the perfect storm – leading naysayers to predict the demise of lawyering as a profession. On the contrary, Law Technology Today in their article Artificial Intelligence Won’t Replace Lawyers—It Will Free Them says the following about legal AI –

“AI and legal technology will not automate the legal profession out of existence. Technology will facilitate growth and productivity by increasing accuracy and driving efficiencies”.

Legal practitioners and law firms, are not on the way to extinction. Not even close. The legal profession just needs an image makeover – embracing flexibility and going with the flow. Legal professionals need to become agile and flexible lawyers”.

And we have always believed that the automation of certain menial tasks would allow for labour intensive work that lawyers and administrative staff alike have struggled with over the years (which always takes up way too much time to complete wasting hours that could be better spent) is not only the next logical step but is also the way of the future.

One which is rapidly approaching.

Clearly, as legal tech providers, we are advocates of the fact that some work can be taken away from immensely busy staff within a legal practice and allocated to legal technology that is there to support you. Not take over your position.

But, despite our founded opinion that technology makes work life easier, there are still those that worry, those that are sitting on the fence and still others that have got no clue – human lawyers vs robot lawyer. Who really knows?

It is confusing to understand exactly where your feelings lie on this particular subject – after all who wants to potentially lose their job to a chatbot? It’s difficult.

“Hey why not discuss the robot in the room?”

The discussion therefore clearly moves away from not just automating certain menial tasks but replacing the role of the lawyer with a chatbot, robot or AI.

According to the article Artificial Intelligence will not replace lawyers, it will free them, they set out the following –

“Artificial intelligence (AI) and machine learning have already arrived in many law firms and legal departments.

AI and legal technology will not automate the legal profession out of existence. Technology will facilitate growth and productivity by increasing accuracy and driving efficiencies. Cleverly integrated AI algorithms are already transforming outcomes in corporate compliance, due diligence, contract management, and e-discovery. Also, numerous “less routine” use cases, including legal research, document mining, and predicting case outcomes, are becoming faster, better, and cheaper with the assistance of intelligent software”.

And we have to agree.

The technology is already here. It is already being used and it is already optimising how legal practices are run. Which is a good thing.

In fact in an article titled Would you let a robot lawyer defend you?, they go into immense detail on how the latest legal tech darling – DoNotPay can help everyday people, who don’t necessarily have the time nor the budget to seek the assistance of a traditional human lawyer in order to attend to small claims and parking fines.

DoNotPay was developed by Joshua Browder in 2015 (but officially launched on 10 October 2018), as a legal app that can be used to draft legal letters and quickly rummage through (and sort) vast quantities of case documents. Seemingly helping consumer and lawyer alike.

Done through a chatbot, you describe what your problem is (for example appealing a parking fine), and it will suggest what, in its “opinion”, is the best legal language to use. The app was originally developed by Browder as a way to contest parking fines (which he had come accustomed to getting and decided to fight against) saying that –

“If you know the right things to say, you can save a lot of time and money.”

The above article further stated that –

“Since then the app has spread across the UK and US, and it can now help the user write letters dealing with a range of issues; insurance claims, applying for tourist visas, complaint letters to a business or local authority, getting your money back for a holiday you can no longer go on or cancelling gym membership. Mr. Browder says the last two uses soared during the pandemic”.

Browder claims an 80% overall success rate, which drops down to 65% for parking tickets (because some people do actually deserve the ticket).

And with over 150,000 paying subscribers, it does make one sit up and take notice.

Interestingly enough, in the same article it was pointed out that whilst most human lawyers would sense the impending doom of their career approaching with such an app, many have actually embraced it.

Why? Well it makes their lives easier.

By helping lawyers sort through immense loads of documentary evidence, apps like DoNotPay can also help in the preparation and structuring of cases, whilst also searching for any and all relevant legal precedents. Considering the range of issues DoNotPay is able to deal with, the extent to which lawyers are able to utilise this type of technology is amazing.

“In the 1980s he was genuinely horrified by the idea of a computer judge, but that he isn’t now.

He points out that even before coronavirus, “Brazil had a court backlog of more than 100 million court cases, and that there is no chance of human judges and lawyers disposing of a caseload of that size”.

So if an AI system can very accurately (say with 95% probability) predict the outcome of court decisions, he says that maybe we might start thinking about treating these predictions as binding determinations, especially in countries that have impossibly large backlogs”.

Do you see the benefit yet?

Herein lies the point – people’s minds are changing about the use of legal tech, AI and even chatbots in their normal day-to-day lives as a means to assist their work load rather than take away from it. And if these systems can help with improving efficiency, reducing backlog, ensuring accuracy and assisting lawyers to improve their overall service offerings – shouldn’t it be embraced?

You don’t even have to take our word for it.

On the 23rd of January 2020, DoNotPay was awarded the Louis M. Brown Award by the American Bar Association (ABA)’s Standing Committee for the Delivery of Legal Services.

DoNotPay was honoured for their commitment to increasing the availability of legal services to those of modest means, and specifically spotlights its innovative use of technology. DoNotPay aims to improve the delivery of legal services and legal information through leveraging chatbots and cutting-edge artificial intelligence technology to provide automated services for common consumer and legal needs.

After all, as stated in the article Robots are coming for the lawyers – which may be bad for tomorrow’s attorneys but great for anyone in need of cheap legal assistance –

“It turns out that you don’t need to completely automate a job to fundamentally change it. All you need to do is automate part of it”.

The appeal of DoNotPay (and various other AI legal software) is obvious – having the ability to sue someone by simply pressing a button on your phone (that is free to boot), sounds like a no-brainer for many people that are not able to afford legal fees.

But at the same time, the benefit is not limited to consumers only. By having a chatbot, AI or legal tech assist law firms to improve the delivery of their legal services and access to legal information when preparing and structuring not only small claims and menial tasks but also supporting lawyers in their efforts to prepare for and structure larger more complex matters – the notion of a chatbot, AI or robot lawyer becomes extremely appealing.

So, is a robot lawyer better than a human one?

The best way to answer this is from a quote in an article (written in 2015) titled The Golden Age of Naked Creativity where Adam Duthie, solicitor and co-founder of Robot Lawyer LISA, states the following –

“There are a range of reasons why people may not want to use a human lawyer, whether that’s cost, time, convenience or finding the prospect of visiting one intimidating. LISA overcomes all of these issues. She’s free, fast, available 24/7 on any device and requires no legal knowledge or training by the user to produce a binding document that protects businesses and entrepreneurs”.

So, while a very solid case is made for the use of “robot lawyers”, we believe that a better discussion to have is –

How can law firms embrace legal tech including chatbots to optimize their offerings?

Keeping in mind the importance of offering legal services to those with modest means, perhaps this is an area that law firms can give some attention to as the next step in the development of their overall service offerings to their clients.

There is no need to lose this revenue to an app. And although we see the merit in the access to more affordable legal services, this is perhaps an untapped area that needs to be explored.

Law firms that have their own chatbots dealing with smaller claims and parking fines (to name but a few things), doesn’t seem so far-fetched now, does it? It can (and should) be done.

And this process can start by ensuring that, at the very least, you have the correct legal tech for your practice on which you can build your future service offerings.

Maximising on what you can offer going forward should be your goal.

Get in touch with AJS today to find out about our amazing products that can automate your practice and take away the labour intensive, repetitive work that is now squarely within the realm of AI, freeing you up to focus on the more skilled work and perhaps even expanding your business.

Broaden your mind and your horizons and let’s see what develops – the possibilities are virtually endless.

How Has Technology Helped the Legal Sector/Industry?