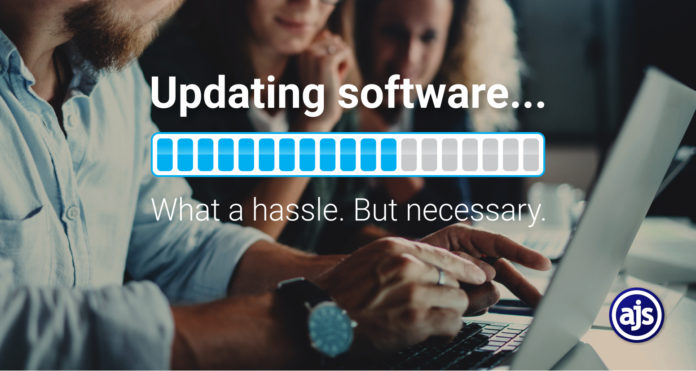 What a hassle. Usually.

We are all guilty of it – the pop-up window appears on our screens and inevitably interrupts our work flow process. Or, even more frustratingly, during our online shopping experience a pop-up screen suddenly informs us that our system is out of date and we cannot complete our purchase (we are talking strictly about essential shopping items of course and not attempts to purchase our designer shoes online).

And we are then asked the dreaded question – would we like to restart our computer or laptop?

I mean, the pop-up never happens at a convenient time. No. It is usually right in the middle of finishing a crucial project right before the deadline or right before we submit our payment information.

So inevitably we click through the reminder to update and plan to do it later. If we remember.

The simple answer is – it is necessary.

Your operating system (which includes your software) is as vital to your computer system as your blood is to you (Pros, Cons & Reminders When Upgrading Your Operating System). Without a proper working and functioning operating system, your device, your computer is essentially just an empty shell.

And it is a universally accepted and universally experienced situation – any task you try and do takes forever to complete. The frustration is felt across every computer screen worldwide. But the reality is – every machine has a lifespan, and with each passing day, it becomes less capable and less able to perform the tasks as it once did.

Without being disrespectful, it is kind of like a person growing older – at 70 you are probably (and this is a general statement) unable to climb Mount Everest with the same enthusiasm as you once did at 21. Perhaps you need a hip or knee replacement in order stay on top of your game. And the same can be said for your operating system.

Sometimes, (and similarly), we need to update or change our operating systems in order to stay on top of our digital game. Remember, there is a continuous advancement in technology, which always leads to new updates or upgrades with better functionality.

But what is involved?

A system upgrade/update typically involves adding new hardware or updating software in order to increase the functionality of a system. But what usually occurs is the preference to replace and purchase a new system rather than update current operating systems. Out with the old and in with the new. Avoiding hassle and getting a better operating system at the same time.

But is it always the way to go?

You see,what often happens is that companies looking to replace their computer systems simply start spending money randomly on various computer components without considering what they actually need or actually want from their operating system. Something that can often be achieved by simply updating their current software.

Before investing in system replacements or updates, it is important to understand what is actually possible when you implement the replacement or update. Some people may need a quick reality check. Remember hardware updates or system replacements are not magical potions that can automatically transform your slow computer into a super-efficient one, complete with the all the latest apps and digital marvels.

There is no “Cinderella moment” here.

Similarly, software updates may have adverse effects if your hardware is unable to adequately support the latest versions – like the software doesn’t speak the same language (remembering interoperability).

And it is important to remember that upgrades and updates are not the same thing.

According to the article System Upgrades: Everything You Need to Know, they set out the differences –

“A software update is also referred to as a software patch and is a free downloadable app that fixes shortcomings in the existing version of your software. Software updates are typically created to address security issues or small bugs that exist within a system. The most common type of software update is one that protects your operating system from weaknesses that hackers or viruses are exploiting.

“for the most part, upgrades are not required. You may be comfortable with your existing operating system, or be working with a machine that doesn’t have the oomph to handle the latest upgrade. Updates, however, are not to be ignored. These are issued for highly functional reasons. Sometimes they include enhancements or general improvements, but often, they fix dangerous bugs in the operating system, or even more important, patch vulnerabilities cyberattacks can take advantage of. It’s this latter reason in particular why you should update your operating system as soon as possible when you’re alerted to do so. Or even better, make sure you’ve set up your machine to update automatically”.

Ok, so what we have learnt is that effective systems updates are often more necessary than upgrades or entire system replacements (and are needed more often than we would like to admit) and involve making coordinated and consistent improvements. Consistency being the operative word.

And that’s all well and good but honestly –

What issues can an update actually fix?

Installing the latest editions of system software can be good for the overall health of your business. Enhanced network security is the biggest reason to update, but you’ll likely also experience an increase in productivity, improvement of morale, and lower costs once everyone is accustomed to the updates.

And, because many business applications have now moved to “the cloud,” future software updates and upgrades may be relatively seamless (more on this next week!), so you don’t have to break out a pros and cons list every time an update becomes available!

But as this is the first one, let’s break down some of the pros and cons of updating –

But there must be some cons to updating?

Well sure. Isn’t there always (at least one) drawback?

The truth is – there are many updates available for every part of your system which usually has better functionality to serve you to the best of its capability. This, as we have established, is unfortunately thwart with inconvenience and carries its own list of cons. But is important to keep looking out for a newer version which can ensure that your system works properly for a long, long, time without any interruptions. For the most part.

As we previously mentioned, future software upgrades may become relatively seamless with the move of business applications to “the cloud”. We look forward to tackling this topic next week – so stay tuned!

Harry Potter and the Attorneys Audit

Going out on your own – Part Four

Are you in the practice of fortune-telling?