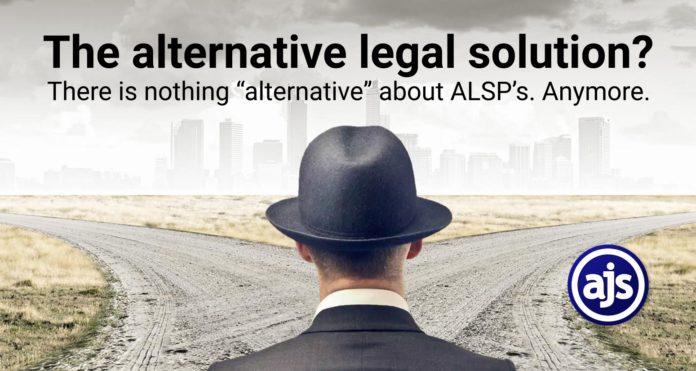 There is nothing alternative about Alternative Legal Service Provider’s (ALSP’s). Anymore.

When one thinks about the word “alternative”, grunge bands playing their hard edge alternative rock in dark Seattle nightclubs during the grunge subculture that arose sometime during the late 80’s and early 90’s comes to mind. One thinks of Nirvana and its tragic front man, Kurt Cobain singing – “Here we are now, entertain us” (Smells Like teen spirit)… his worst song. Apparently.

Well, at least, I do…I lived through it. And whenever people mention the word alternative to me, that’s what I picture. Call it an age thing.

But the word “alternative”, regardless of whether you are a closet grunge (still hording your old “10 up” Doc’s in your closet) or not, conjures up the idea of something different. Not the norm. And possibly outside the man or woman on the streets comfort zones.

No. Not even remotely the same thing. Take a deep breath. There will be no need to head bang anywhere in the vicinity.

ALSP’s are simply an option outside of the traditional, standard, “what we have come to expect” law firm models, where lawyers can be found working in senior roles alongside legal technologists, analysts and project managers. They are often seen as “niche companies”, specialising in providing high-demand legal services such as, document review, contract management, legal research, litigation support, discovery and electronic discovery (“e-discovery”).

But recently, these ALSP’s have been hailed as reshaping the business of law, with technology as their north star, their guiding light and their “piece de resistance”.

If the new survey on ALSP’s released by Thomson Reuters (“the survey”) is anything to go by, ALSP’S are less alternative and are becoming more commonplace. In fact one could say that “There really is nothing alternative about ALSPs anymore – even the name is stale.”

And with that said, we turn to the survey for some insight…

To start off with, the ALSP market was valued at almost $14bn at the end of 2019, an increase of about $3.2bn from the previous two years. Showing substantial growth in the market. In fact, 79% of law firms and 71% of in-house counsel now engage ALSP’s for legal work compared to 51% and 61% respectively in 2016.

And if money and growth are the only two forms of measure against which we hold our yardstick, it feels a little like Bill Benter and his algorithm that couldn’t lose at the track)– Off to the races, my son!

But sports betting aside, one thing is clear – ALSP’s are no longer seen as the unwanted “alternative” competitor that they once were. The data released by the survey actually supports the fact that there is an increasing sense of collaboration, rather than competition, between law firms and independent ALSP’s. Law firms and in-house counsel are collaborating with their ALSP’s counterparts and are realising the value that can be gained by working together with their ALSP’s.

In fact, according to the survey, the fastest growth in the ALSP market has been among ALSP’s that law firms have formed as captive subsidiaries. While it is still the smallest segment of the ALSP market, it is growing at a rate of about 30% a year. And that’s nothing to scoff at.

According to Mike Abbott, vice president of Market Insights and Thought Leadership at Thomson Reuters said that –

“The ALSP market is rapidly maturing to the point where it is becoming a mainstream legal option and less of an ‘alternative,’ paving the way for additional growth.”

“ALSPs are no longer merely low-cost providers of services for firms and corporations to outsource, such as document review. The focus of ALSPs on technology innovation gives them a critical edge and makes them ideal partners to take on increasingly important tasks, such as project management and consulting on legal technologies.”

And whilst the above is impressive, it is the above comment by Lisa Hart Shepherd about ALSP’s being on the cutting edge of technology innovation that has got us really excited.

Why? Because ALSP’s, a market on the rise (with both law firms and in-house counsel confirming that over the next five years they expect to nearly double the average number of ALSP service lines they use), the ALSP market is one which legal tech companies need to collaborate with. To work together with. Need to get into bed with.

Their grunge factor having been well and truly shaken off, ALSP’s have seemingly come out of their dark and dank night clubs, removed their tartan and stepped into the light of day, taking a deep breath of the morning air, swiftly going for a shower, a cup of Seattle coffee and a breakfast.

It’s a new day my friends and this post-grunge ALSP swan is heading head first into the legal tech fray. Head held high!

According to the survey, one of the fastest-growing services where law firms are engaging ALSP’s is consulting on legal technology. As ALSP’s are considered to be agile early adopters and innovators for cutting-edge technologies such as artificial intelligence, block chain, predictive analytics and smart contracts, they are in the perfect position to utilise legal tech in a way that best serves their clients –  for example for e-discovery, legal research, regulatory risk and compliance services (such as the FICA management system offered by AJS in their overall practice and financial management “toolkit”), areas where legal tech is needed the most. And by doing so, can thereafter advise on legal tech, by having their finger directly on the pulse.

So, I guess the question is – if ALSP’s are so fantastic, why are not ALL law firms and in-house counsel utilising them?

So why aren’t they?

Not that we are talking on behalf of ALSP’s in any capacity (whatsoever) but as we said in our article listed above, Be flexible, man! – Incorporate legal tech into your practice, when using the right technology, technology that enables and supports its user – quality and confidentiality are not aspects that ALSP’s will need to worry about.

With the right technology, ALSP’s can guarantee their clients that both quality and confidentiality are not only important aspects taken into consideration on a daily basis by their legal tech providers but is also guaranteed by the products they provide.

How can legal tech guarantee both quality of work and confidentiality of clients?

An increasing number of practice management platforms provide the tools to provide quality service while minimising routine (and repetitive) labour intensive tasks. Software specific to individual practice areas and workflow automation tools like AJS FLOW make it easier to automate repetitive processes and increase output by improving control and ensuring that nothing slips through the cracks. Perfect for any process that has a defined set of steps or stages, such as simple contract drafting, document review or debt collection, eliminating “busy” work and allowing ALSP’s to generate more income whilst servicing more clients.

AJS also offers an entire suite of stable and reliable legal enterprise products that are designed to make a legal practice, especially one that fully embraces legal tech, to be more efficient (and less labour intensive) by ensuring predictability and accuracy in the most crucial aspects of their practice – by offering services such as enterprise accounting and document automation (to name but a few).

By automating these labour intensive tasks, which are often seen as a sand trap for manual work affecting the inability to provide quality output, a certain assurance can be given that accuracy and quality is always top of mind.

And what about the confidentiality?

In our article Cloud hosting – Managed or traditional?, we talk about the benefits of a managed hosting service –

“Companies using a managed hosting service get data protection benefits such as high availability and disaster recovery. Servers are also constantly and critically monitored for any irregularities or potential failures (hosting providers are well equipped with various tools and have tons of experience dealing with server security related issues). They constantly scan the operating system and core application to find security vulnerabilities, which they can fix in order to prevent the server from being attacked. Running security audits like spam filtering virus scanning, software firewall configuration and OS updates is an invaluable tool in your “prevention is better than cure” arsenal”.

The AJS managed hosting service will provide ALSP’s with data backup, ensuring that all sensitive information about the clients of ALSP’s (amongst other things) is protected and guarded at all times (AJS also encourages its clients to have their own additional and separate backups).

AJS has your back and keeping POPIA always in mind, through their comprehensive practice management and cloud hosting services, they assist in keeping clients systems completely ransomware resistant. AJS’s suite of services supports the information management process by not only keeping cyber security top of mind but also ensuring client information is safe from “prying eyes” and data breaches. Client information and therefore their confidentiality is always sacrosanct.

The relationship between ALSP’s and legal tech companies, such as AJS, seems bright and full of opportunity for growth. Some might even say a given win-win.

And if I were a betting woman, I would be heading off to my closest horse track to take a chance on a triple trio – hey if you knew (beyond a doubt or at least had Bill Benter in your corner) that you were going to win, wouldn’t you bet?

And the mix of ALSP’s and legal tech, at least from where I am sitting, looks like a sure win.

Harry Potter and the Attorneys Audit

Going out on your own – Part Four

Are you in the practice of fortune-telling?