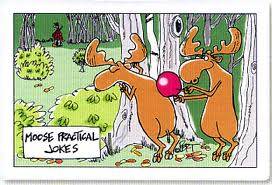 Two Irishmen, Paddy and Mick, got a pilot to fly them to Canada to hunt Moose. They managed to bag six Moose. But as they were loading the plane, the pilot said he could carry only four Moose.
The two lads objected strongly, “Last year we got six. The pilot let us take them all and he had the same plane as yours.”

Reluctantly, the pilot gave in and all six Moose were loaded. However, on take-off the little plane couldn’t handle the load and went down, crashing into the wilderness.

Somehow, Paddy and Mick survived the crash, and climbed out of the wreckage.

Paddy asked Mick, “Any idea where we are?”

“I think we are pretty close to where we crashed last year.”