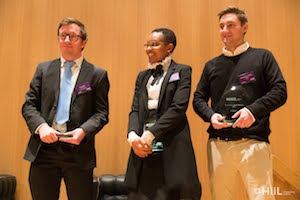 The winner of the Innovating Justice Challenge was announced as South Africa’s Citizen Justice Network – an initiative that expands upon the nexus of journalism and the spreading of legal information.

Citizen Justice Network trains community paralegals to be radio journalists, and then pairs these paralegals with community radio stations so that vital social justice content can be produced and spread.

Decided upon by a jury of highly experienced individuals from the private, not-for profit and legal sector, the second runner-up was JustFix NYC.

The winners were selected from over 600 applications to the Innovating Justice Challenge 2017 worldwide. As well as earning prize money worth up to EURO 20 000, Citizen Justice Network and Lady Liberty will join 26 other innovations in the HiiL Justice Accelerator programme (HJA), which will offer further support and funding throughout the year.

Applications for the 2018 programme will begin in March.

Senior Fellow and Associate Director at New York University’s Center on International Cooperation David Steven’s call to action from the Forum’s mid-morning panel session to “make 2018 a year of justice”, was made more realistic from the innovations showcased at this year’s Forum.

About the 2017 Innovating Justice Forum

The Hague played host to the 2017 Innovating Justice Forum, where world renowned justice leaders and 15 of the best justice entrepreneurs gathered for the sold out all-day event. The Forum became a temporary hub for formulating how justice can be more accessible, and the answer was clear – through innovation using technology, entrepreneurs, creativity and data.

Curing people’s justice needs is the goal of all those who partook in the Forum at the Peace Palace. As justice leader H.E. Mr. Abdulla A.J. Al-Majid said at the opening panel, “Justice is not about the state, it’s about the people. It is about happiness for the people”. The panels of expert justice leaders, the skill sessions and workshops ranging on a multitude of topics, all related to the Forum’s 2017 theme – breaking barriers to justice innovation.

Led by academics, legal professionals, startup guides and more, these sessions allowed the audience to interact and experience not only why justice innovation is needed, but just how it can be done. The Forum is also the culmination of the nearly year long Innovating Justice Challenge run by HiiL’s Justice Accelerator team, which saw 15 justice innovators pitching at intervals throughout the Forum, with Ukraine, The USA, Uganda and South Africa among the worldwide representatives.

Representatives were present from the Ford Foundation, The Dutch Ministry of Foreign Affairs, the UNDP, RMIT University’s Centre for Innovative Justice from Melbourne, LegalZoom and many more. Justice issues being tackled by the pitching innovators were as diverse as road legal advice for drivers in Zimbabwe, a bot in Ukraine which speeds up ™ applications, and online platforms for legal professionals here in The Netherlands.

HiiL (The Hague Institute for Innovation of Law) has been based in The Hague since 2005, and wants to provide for people’s justice needs worldwide using innovation, creativity and knowledge. HiiL’s goal is that by 2030, 150 million people will be able to prevent or resolve their most pressing justice problems.