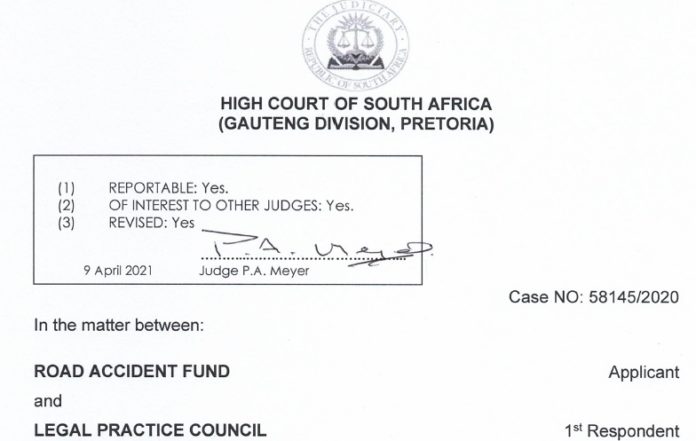 In a judgment which will undoubtedly be quoted for many years, and may become a cornerstone of our constitutional jurisprudence, the High Court, Gauteng, Pretoria,  has suspended all execution against the RAF. This is a unanimous decision by Meyer, Adams and Van der Westhuizen.

The judgment details the pertinent facts, the nature of the application, jurisdiction and the financial position of the RAF, and constitutional issues at stake. The issue of jurisdiction is dealt with in paragraphs 11 to 17.

The highlights are that

In a word, the RAF is insolvent.

As a creature of Constitutional statute, the Road Accident Fund is both a feature of our litigation landscape and a semi organ of state.

Important questions are raised by this judgment and a discussion here would amount to no more than speculation, but as it stands, the RAF cannot be liquidated and continued execution of writs and warrants of execution with the removal and sale of its assets would have a serious detrimental effect on the RAF’s continued operations. It follows, that in order to preserve the RAF intact, the Courts order is justified.

Case Summary: Practice – Warrants of Execution – Suspension of warrants of execution and attachments – Whether writs and attachments should be suspended in the particular circumstances of this case, either in terms of rule 45A of the Uniform Rules of Court or the common law or Section 173 of the Constitution, 1996.

At the very least question to deal with include

It would be in the interest of our Constitutional jurisprudence to take this matter on appeal to clarify and establish the nature of this type of litigation and the effect of orders such as this.

Carl Holliday is an attorney specialising in practice management and compliance.