LexisNexis South Africa – a member of the RELX Group and a leading global provider of content and technology solutions – has conferred its Rule of Law Champion Award on two leaders in the legal sector, Judge Dennis Davis and Nic Swart, chief executive officer of the Law Society of South Africa (LSSA). The awards were presented at the company’s year-end event on 18 November 2015.

Following the lead of LexisNexis globally, the inaugural South African award aims to celebrate and acknowledge those within the South African legal fraternity who have led efforts to advance the rule of law and strengthen civil society.

LexisNexis CEO, Billy Last, said: “LexisNexis is guided by its global purpose of helping clients to uphold the rule of law and supports the notion that sustainable social, political and economic progress can only thrive where the rule of law exists. This philosophy is the foundation of our business activities and corporate social responsibility efforts.

“The Rule of Law Champion Award is a demonstration of our belief that globally businesses, law firms, NGOs, and other organisations play a powerful role in advancing these ideals around the world,” he said.

Judge Dennis Davis – while unable to be present at the event due to court commitments – was honoured as the recipient of the Rule of Law Champion – Department of Justice Award. He is a pioneer working in the field and a highly respected legal mind. In 1998 he became a Judge of the High Court, and the President of the Competition Appeal Court in 2000. He was a member of the Commission of Enquiry into Tax Structure of South Africa (the Katz Commission) and was a Technical Advisor to the Constitutional Assembly where the negotiations for South Africa’s interim and final constitutions were formulated and concluded. Since his appointment to the Bench, he has continued to teach constitutional law and tax law at University of Cape Town (UCT) where he is an Honorary Professor of Law.

The Rule of Law Champion – Industry Award recipient, Nic Swart, continues to make an impact through partnerships and his role in determining standards for the legal industry. Not only is Swart the CEO of the LSSA, which brings together the Black Lawyers Association, National Association of Democratic Lawyers and statutory provincial law societies, but he is also Director of its Legal Education and Development (LEAD) unit and has been instrumental in steering its development since 1989. Under his leadership, LEAD provides personal development, vocational legal training and CPD to over 11 000 legal practitioners annually. He has promoted judicial skills, women lawyer leadership and electoral democracy training. Skills development in commercial law has taken place over a substantial period in cooperation with Irish Rule of Law. The Law Society South Africa has been registered as an election observer in accordance with its vision to promote the Constitution. 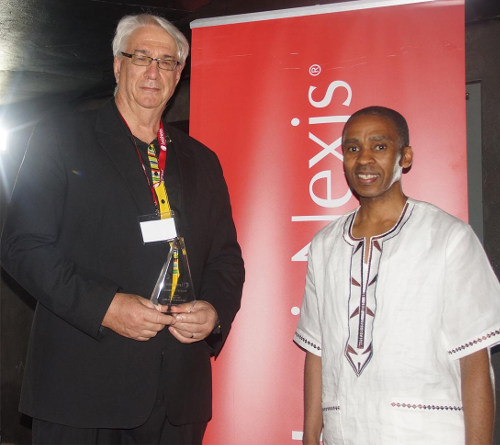 Swart supports the LSSA leadership in the management of the complexities of a legal profession in transition, guiding the society and its members around important issues such as public interest, governance, qualification and professional ethics. Through the LSSA he has worked closely with law deans and teachers as well as the Council on Higher Education (CHE) and law faculties, to establish the most important skills that should be attained by law graduates alongside the importance of developing, legal ethics, constitutionalism and social context. More recently the LSSA Council and management, with Swart as CEO, cooperated fully in the long process that led to the Legal Practice Act being promulgated and the associated efforts to create a transparent, transformed, public-centred and responsive attorneys profession that is strong, independent, vibrant and effective.

At the LexisNexis year end event Roy Hockey, Director, of anti-human trafficking organisation, Redlight South Africa, also outlined the work the organisation carries out. Since 2011, the global LexisNexis organisation has redirected its corporate social responsibility efforts towards the fight against human trafficking, identifying and working with partners who are experts in the field.

Global LexisNexis Rule of Law Award Honorees have included Ban Ki-moon, Secretary-General of the United Nations, Mary Robinson, first woman President of Ireland, Former United Nations High Commissioner for Human Rights, and President of the Mary Robinson Foundation for Climate Justice, and Laurel G. Bellows, Past President of the American Bar Association and Founding Partner of The Bellows Law Group, P.C. The LexisNexis Africa division, in partnership with the Commonwealth Lawyers Association, also recently conferred its own inaugural award on Ms Robin Sully, a Canadian lawyer, whose career has led to an outstanding contribution to the rule of law both in Canada and across the Commonwealth.

In November 2015, LexisNexis® South Africa established itself as a leader in conveyancing solutions in the South African legal market with its acquisition of a 100% stake in Korbitec (Pty) Ltd. For more than 38 years, Korbitec has been a trusted pioneer and provider of innovative workflow solutions for South African property professionals, including market-leading solutions, GhostConvey and WinDeed.