Economy – StatsSA reports that our government’s gross loan debt stands at R2.2trl at present and should stabilise at R3.5tln. This equates to a present debt of R40 000 per person in South Africa. For a country where the long-term per capita income is expected to trend around US $7700, one wonders how this will be dealt with?

State debt is not extraordinary; however, we South Africans seemingly are unable to grow out of that debt. Put this another way: for the first time, since universal South African franchise, I’m starting to wonder whether we are not doomed to banana republic status.

The SA Forum of Civil Engineering Contractors have written to our finance minister, stating that R25bn worth of construction projects are disrupted owing to violent community demands for employment. To have to ask such assistance is indicative of unravelling social order.

Bantu Holomisa: “BEE can be done on a commercial basis and the banks had been doing it for decades. PIC-funded BEE transactions – and other poorly structured unlisted investments – that are losing money, are a sophisticated way of looting from the state.”

The rather glum tone of this note should be offset by happiness: two interesting notes on happiness may be found on the Ted Talks site; a topic unsurprisingly popular. They are:

Do you have a broker? This is not news but reiterates what is being said before: the Financial Times ran an article this week holding that European active managers were beaten by passive managers over a 10-year period. Tell your broker to reduce his fees!

Both the Richmond and Mtubatuba municipalities have been taken over by our provincial government.

Power backups? Be careful of linking up a generator or solar system into your house supply. This may well impact on obtaining an electrical clearance certificate as well as potentially being illegal: one should not connect electrical generation equipment to an electrical system without municipal consent.

The Payprop Index holds that in the Western Province our home rental escalation has been less than 4% in the last quarter of last year; compare this to 8% in the Free State! Nationally, our home rental growth slowed to 4.14% in the final quarter of 2018.

As regards retail property, John Loos says that our weak financial fundamentals saw retail rentals slowing to a mere 0.25% escalation in the final quarter of 2018.

A bill, amending the National Qualifications Framework Act, has been submitted to the Prez for signature. The head note the this indicates that it will provide for registers of fraudulent qualifications and a system whereby qualifications could be verified and evaluated.
https://www.parliament.gov.za/storage/app/media/Docs/bill/65fa3c9f-e230-45ec-8171-6ae34aff1ed6.pdf

The brand the bar is punted by advocate Watt-Pringle; take a look and judge for yourself:
https://www.sabar.co.za/law-journals/2018/december/2018-december-vol031-no3-pp03-07.pdf

Should debt relief be provided to honest but unfortunate debtors who land in a hopeless financial situation owing to factors beyond their control? This statement, in itself may be contentious as it creates the impression that debtors have no control over their financial future? In any event, what is true, is that the hopelessly insolvent are unable to walk away from their disastrous financial situations whilst those who are almost so, are able to do so, via often friendly superstitions. For a discussion on the issue (in Afrikaans) see
https://www.litnet.co.za/vonnisbespreking-nog-n-vriendskaplike-sekwestrasie-aansoek-sneuwel/

Are you involved in a trust and need to Fica your overseas children in their capacity as beneficiaries in order to keep your bankers happy?

I confess to not being comfortable with why it is necessary to do this? FIC Guidance Note 3A, in clause 21, simply requires the personal details of trustees, each beneficiary and the founder. It does not require that a beneficiary’s address must be verified. Indeed, many trusts have multiple beneficiaries who are not necessarily identifiable, let alone have their addresses checked.

Banks insisting on the FICA particulars of beneficiaries inclusive of proof of address can be very frustrating as a bank would simply terminate your account if you are not able to produce the requisite information in time.

I understand that the Small Claims Court jurisdiction will increase to R20k on 1 April.

Be happy for this moment. This moment is your life. Omar Khayyam

Which is best: between the sheets or under glass? No, I’m not being lewd; this is a reference to reading an actual book as opposed to reading the text on a machine. The former, apparently, is to be preferred as our brains are predisposed to spatial recognition (think terrain navigation) and, in books, digital distraction (the ability to jump around e-wise) is absent.

Poll results on the expected result of the upcoming election say that a third of our voters feel that no party represents their views. Given that we have fortysomething political parties contesting the election, that is hardly surprising. What is surprising, in fact disconcerting, is the number of voters (the pessimists… forecast 20% of those who vote) who are expected to support the EFF: a party spewing vituperation and division. The pessimistic.. forecast for the ANC is 60%: a fissiparous party which has raped our economy over the past 10 years and is looking forward to being rewarded with more votes! Democracy truly sucks!

A part of our problem, I would suggest, is the inability of those who govern us to distinguish between party and state. This is exemplified by a recent report on a minister handing over a house to someone in the Coligny area: the lady was wearing an EFF shirt and the ANC wished her to change her garb; she refused. Good. There is no reason why one must kowtow to a party when the largesse is handed out by the state.

Our politics has become constipated; we need freedom of movement (pun unintended).

I didn’t realize what true happiness was until I got married.

But by then it was already too late.

Has obviously never paid for a divorce.

What starts with M, ends with E and can bring two people eternal happiness?

Me, I’m a divorce lawyer

And finally, unsolicited advice on how to stay happy: Never ask a woman who is eating ice cream straight from the carton how she’s doing. 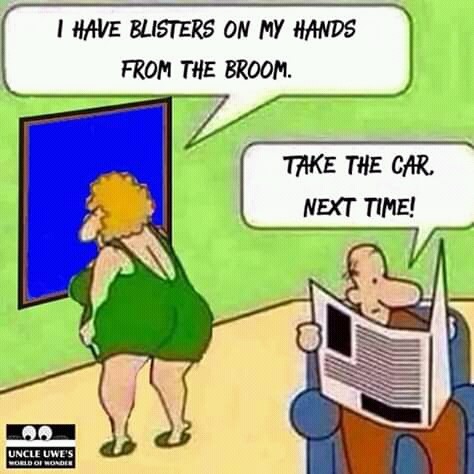