Economic review – It is not only South Africa that is again experiencing an economic slowdown: the European Commission cut its forecasts for the Eurozone’s economic growth this year to 2.1 percent. The economies of both France and Germany are expected to lose steam both this year and the next. The slowdown is attributable to the growing trade tensions with the US.

The Global Innovation Index 2018 has Switzerland in the first place, followed by the Netherlands, Sweden, the UK and Singapore. China has risen to number seventeen.

The SA sugar industry has had a 27% yoy reduction in sales, owing to our sugar tax coupled with significantly lower world sugar prices. The latter is attributable to cross-subsidisation of sugar production elsewhere.

VBS bank: the funds plundered from that bank is said be in the region of R1.5 billion. Several municipalities illegally invested in that bank; I cannot recall having heard of any municipal official being taken to task over this? The curators of this bank are reportedly going after the plunderers of funds by way of sequestration proceedings. The perpetration of such an enormous fraud deserves criminal proceedings; gaol-time is what is called for.

SAA has announced that it will seek a minority private sector equity partner. One must wish them good luck with that! Who would fund a scheme of that size without the certainty that the will to turn it around exists. If that will existed, a partner would not be necessary.

Commenting upon stalled road construction projects Sanral said “People are anti-fuel levy now. So now, you can’t use the fuel levy. And then public funds are not sufficient”. One wonders why the fuel levy that we which started out as a fund to develop our road infrastructure, cannot be used.

Above reproach: Caesar divorced Pompeia after Clodius, apparently intent on seducing her, had gained entrance into the festival of Bona Dea, was charged for sacrilege but was found not guilty. His reasoning was that Caesar’s wife should be above suspicion. This principle still stands today and applies particularly to persons in high office. The breach of this results in dubious candidates being considered for positions for which they should never be considered simply because of this reason.

The Financial Planning Institute has suspended its examination authority because candidates had apparently bribed staff to ensure a pass. This is the second time that this has happened…

I am a fan of Prof Jansen: one has a respected academic who speaks often unpleasant truths and is not afraid to do so. His latest offering deals with education: the fact is that getting into a prestigious school does enhance one’s chances of progressing in life. Mere enrolment in schools is a great statistic often bandied around, but what counts is the quality of teaching and outcome. Not one activist organisation has focused on just this issue and our Minister has been unable to persuade the teachers’ union to submit its members for competency testing. Education is not the great leveller we are taught it is; good education is.

A report on the KZN property scene in Industrial & Business holds that we are in a buyers’ market at present: there are more homes listings for sellers to compete with and fewer interested buyers: the result is that it takes longer to sell, currently twenty-one weeks in KZN. In Pretoria this turnaround time is as short as eleven weeks. Nationally the average time on the market is twelve weeks, which is better than the seventeen weeks that was recorded for the final quarter of 2017.

This take is supported by Standard Bank’s HPI, which deals with national median property prices, and which has dropped slightly, meaning that properties have become more affordable. The IOL report that deals with this, also says that banks have become more lenient with their lending requirements, with more 100% home loans being granted than before.

National building regulations: zoning decisions lie within the competence of a municipality. A decision by a municipality on the approval of building plans cannot be reviewed by the National Building Regulations Review Board.

Cheap talk and being above reproach. Much has been said about advocates Jiba and Mrwebi returning to the advocate’s profession and, indeed, the NPA. The mere fact that the SCA has found their being struck from the roll of advocates as being an inappropriate sanction, does not make them suitable for leadership in the NPA. The finding was that they had done wrong but because there was no personal gain from Mrwebi’s conduct he should not be struck off the roll. Furthermore, there was a finding that they might have acted in good faith but were probably incompetent. By no stretch of the imagination should one appoint such as those as leaders in an organisation as crucial as the NPA.

Johnson & Johnson was ordered to pay $4.69bn to 22 claimants who had been harmed by that company’s talc products, which has been linked to ovarian cancer. That company maintains that its talc does not contain asbestos. The saga continues.

Negligence and householders: If a danger to children exists on the premises of the occupier of a house and he fails to bring this to the attention of the parents of such children who are present, he will, in principle, be intellectually liable if children are injured because of that danger.

What happens when the judge hearing your case dies? In this case the judge had heard the case and was set to hear arguments by the parties concerned; he then died. The parties were ordered to start afresh. This for a case where the fire started in 2004; the parties had gone to court in 2011 and the judge had died in 2017.

Is the law an ass? An affidavit to support a request for the condonation of late filing of documents requires a reasonable explanation for the default and the disclosure of a bona fide defence. This case dealt with the terms opinion, submit, confirm and verify. Perhaps not, but certainly tiresome.

Water abstraction servitudes: the case, referenced below, deals with water abstraction rights and the preference of use given to those holding servitudes over the holders of ownership rights. What is to be taken from this is that drafters of servitudes should be as clear as possible and ideally deal with complex servitudes by way of registered notarial contracts rather than the very brief, but cheap method, of reserving ownership rights on transfer.

More on being above reproach: much has been made in the press about Mr Zuma’s new attorney. Last week I published a note by an academic on probity in our profession: the fact is that we have individuals within our profession who cannot, by any stretch of the imagination, be said to be squeaky clean. If the press write-ups, unchallenged by those affected, are only in part true, then our law societies have failed dismally in their policing of our profession.

Whilst on the topic of being squeaky clean: those defending leaders, who have been fingered for partaking in parasitic and corrupt practices, often miss the point that we are entitled to squeaky clean leaders. The failure by our political leaders, the compromised NPA and civil structures, such as professional governance bodies, to deal with those who are not squeaky clean, is at the root of much of the corruption in South Africa.

Realpolitik: our president kneeling before the Zulu king is indicative of a constitutional democracy held to ransom by traditional leadership. The fact of the matter is that the lack of tradable title has financially trapped a great many of our citizens within an essentially feudal system.

Whatever one’s take on the land claims issues being played out, the fact of the matter is that we have a majority of citizens to whom political promises have been made and, at the end of the day, the majority will receive what must be paid politically, in order for those, who promised, to stay in power. The response by groups set against this tidal wave of sentiment, is a call upon reason: rationality is not going to take anyone anywhere on this issue.

A son gifted me Nial Ferguson’s Empire: topical to the current dialogue of colonisers on giving back, he concludes that, in general, the less developed countries, annexed by the British, benefited more from being included in that Empire, than the loss of their goods to Britain. Politically unpalatable as it may be, Ms Zille may well have been correct in her sentiment that colonialism in South Africa also brought good. Those calling for the de-colonisation of our system of governance have a point, but the fact is that South Africa inherited a political system that may have been designed for European conditions but was developed and refined for over a thousand years. Much like the law that we inherited in South Africa, which draws its history from much further back.

Democracy substitutes election by the incompetent many for appointment by the corrupt few. George Bernard Shaw

World history in one sentence: These white men are dangerous. 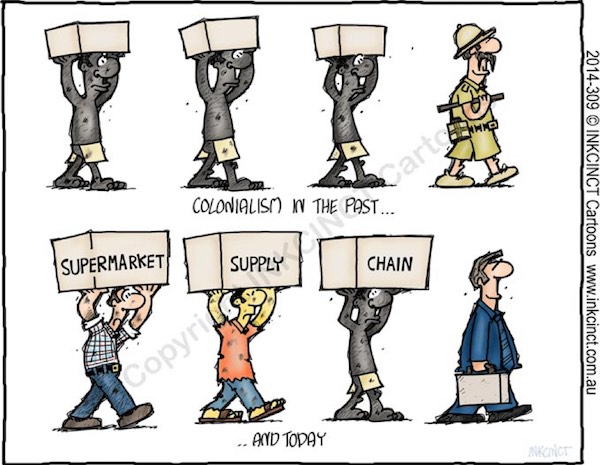