Economy – The US is said to be the largest giver of foreign assistance: this president Trump wishes to curtail when it comes to countries unfriendly to the US. Understandably, the threat of cutting off aid to countries that vote against the US at the UN’s smacks of coercion, but one cannot really take issue with the principle at stake; can one?

Judge Dennis Davis, this week, raised the question of how the government is going to be able to fund the economic stimulation package announced by Ramaphosa. He noted that ahead of the election no public wage bills will be cut. He also noted that whilst wealth taxes may appear to be an answer, they do not bring in a lot of money; in any event, owing to our declining levels of tax morality, such taxes do not appear to solve the problem of funding the promised stimulation package. He mentioned a proposal that I have heard before: that top companies should contribute 1% of their capitalisation value to a fund which would be used solely for the purpose of developing the economy: call it redistribution (redistribution sounds good, but tax really is little else other than that?).

Human capital may be defined as the level of education and health of a population and is a determinant of economic growth. A bunch of academics from the University of Washington, Seattle and the University of California, Los Angeles did a moerse lot of calculations and came up with a ranking, which lists Finland as number 1, South Korea as number 6, and the USA as number 27. South Africa comes in at 144th. This calculation has been roundly criticised, but is interesting nevertheless: https://www.thelancet.com/action/showPdf?pii=S0140-6736(18)31941-X

Oops! The SA Arms and Ammunition Dealers Association says that the SAP had allowed its computer program software licences to expire and has not implemented the promised electronic interface system between its firearm registry and firearm dealers. The result, so says that Association, is that there is no electronic database that tracks the sale, ownership and transfer of firearms and ammunition. As an aside: I acquired a pistol whilst prosecuting at Alexandra Magistrate’s Court in June 1976 (that is where the ‘76 riots started): those not showing respect, such as I, were banished by the chief magistrate to what was then Outer Mongolia. As my licence had lapsed, I turned this in and, strangely enough, sleep better than I used to.

For those of us owning trademarks, patents and designs in Namibia: the new Industrial Property Regulations were published and came into effect on 1 August. If you have such an interest there, it might be worth having a local expert take a look: I understand that a twenty-year patent term has been provided for.

Huawei will be launching its Mate 20 early in October: this may well be worth a look. Traditionalists swear by Apple or Samsung, but these may well be outclassed by newcomers at a much better price.

Conveyancing: some years ago, it became a practice requirement to refer to the 1971 Sectional Titles Act, rather than the 1986 Act in the first condition following the property description in sectional title deeds. We are now finding increasingly that our Deeds Office is insisting that, when a scheme was approved under the 1971 Act, the old format of the 15B(3) be followed when referring to the levy clearance certificate, rather than the current reference to the Sectional Titles Management act. If you are unclear about this, ask me for an example of each.

Fresh promises for the development of state infrastructure have been made: this might address the lack of confidence prevalent in the civil contracting sector evidenced by the latest BER index. An interesting footnote by FNB was that tender price competition had eased, probably owing fewer contractors remaining!

The Times reports that Ekurhuleni plans to expropriate 4 pieces of land without compensation. The stated intention is that the city wishes to test Section 25 of the Constitution.

The dispute between the KZN Law Society and Varsity College over the latter’s LLB accreditation has taken a new turn: the Council on Higher Education confirmed that there is no difference in the quality standards applicable to the Varsity College degree compared to that offered at public universities. This is not disputed by the Law Society.  I confess that, whilst the Law Society’s take may be literally correct, it will be a dark day if students at this college is not allowed into the profession.

The High Court in Pretoria has ruled that, where the monetary value of an action or application is within the jurisdiction of the magistrates’ courts, such actions or applications should be instituted in those courts, unless the High Court specifically grants permission for it to hear the matter. The bone of contention was that banks wished to approach the High Court, claiming that the magistrate’s’ courts were inefficient. The court disagreed and found this to be an abuse of process and impinged on the rights of access to justice of poorer litigants.

A divided bar? Zimbabwe had, following on the Beadle Commission, fused their legal professions in 1981. The arguments then raised for and against fusion revolved around (amongst others) efficiency and objectivity. One of the considerations that weighed heavily was the argument that a fused profession could deliver cheaper legal services than was the case under a divided system. The counter argument was that, because an attorney’s overheads are much higher than those of an advocate, the latter could in theory deliver the same services more cheaply. Also, because of an advocate’s greater experience he would be more efficient than an attorney. The Beadle Commission considered these and found for a fused system.

Who must sue for eviction: the owner or the mortgagee?

Most bonds contain a clause which says that the bank has the right to rentals if the bond payments are not forthcoming. If a bank holds these rights as cessionary, can the owner still sue for eviction? In this case, the person’s to be evicted raised as defence against the owner that it had no standing to sue as these rights were held by the bank. Desperate times. The question was not conclusively answered as the owner had obtained a re-session of the right to evict from the bank. Take a look: http://www.saflii.org/za/cases/ZAWCHC/2018/124.html

ADR in commercial practice and in the construction industry: two UCT professors and the director of an international law firm teamed up to write a note on ADR, finding that it is often the most appropriate form of dispute resolution, especially where social capital is at stake. Ask me for a copy.

Hummmmm: casting around for things Eastern, the meditative aspects of yoga presented itself. I chanced across a yoga pose termed Savasana: take a look:

No, it’s not a virus; you just never knew your husband was meditating… Apparently one needs to end off one’s yoga session with the corpse pose and hold this for at least 15 minutes… Give your man a break!

I have a visceral dislike of Minister Bathabile Dlamini: arrogance built on being untouchable has no place in governance. Would someone buy those judges at the Concourt a Bells!

Monks do yoga? Yes? What follows below is what I have in mind in my sojourn to the East (surrendering myself to inner peace and so on…), and what is real (incidentally the image on the right was titled: Joga Goat!). 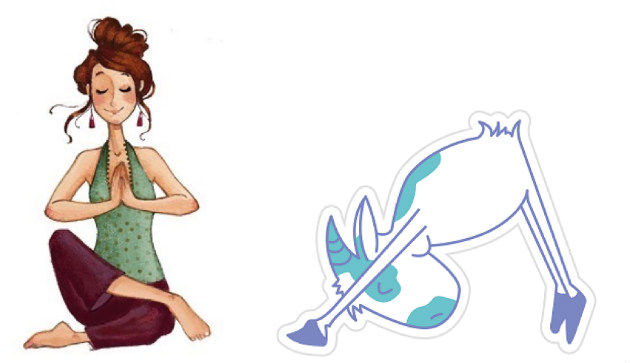