Business – Coca-Cola is reportedly in talks with a Canadian marijuana producer to develop health-focused beverages that will ease inflammation, pain and cramping… Surely someone should be doing field tests in Margate?

Durban has been named the fifth wealthiest city in Africa after Johannesburg, Cape Town, Cairo and Lagos. South Africa is reportedly the overall wealthiest country in Africa but has one of the slowest wealth growth rates over the past ten years: the second worst after Egypt. Interestingly, Mauritius came out tops with a wealth growth rate of 195% compared to the continental average of 13%.

Our finance minister says that more than half of the municipal managers and chief financial officers in South Africa are not qualified to fill their posts. He intends giving them eighteen months to do so. Good: one wonders what standard he envisages that can be achieved within eighteen months? Perhaps these guys are just quick learners.

Jones Lang LaSalle, a real estate consulting firm, says that the cost of occupancy in SA super-regional shopping centres had increased significantly since 2016. Vacancy rates in such accommodation was at 4% and is on an upward trajectory. Neighbourhood shopping centres have also recorded a decline in occupancy rates.

Varsity College admitted students to register for LLBs. The KZN Law Society refuses to acknowledge these degrees as it maintains that only universities may offer LLBs. A decision from our local High Court is awaited.

Mr Malema will be issuing a constitutional challenge to the Riotous Assemblies Act of 1956.

Prof Davison assisted a quadriplegic friend to die. Whatever one’s take on the topic, it does feel wrong to punish him severely. If that is the case, then surely it is time for our legal system to address this need in society.

Are you, on average, earning more than your partners? Then you are probably subsidising them. Not a bad strategy if you need their support, but, you must ask yourself what support is given that you cannot buy in and how much work is actually brought in by others on your behalf. In small towns it may make sense to attempt to provide a full service but in cities, mid-level specialists often don’t need the support of company as customers seek such specialists out; especially if you have an established reputation.

Don’t you just hate lawyers? The RAF has had 50 500 attachment orders brought against it over the past three years. It blames lawyers for its predicament. It would be quite interesting to see what the RAF pays for its own legal advice?

The Constitutional Court published its decision in the Hunter v the Financial Sector Conduct Authority and others, following on a dispute whether so-called orphan pension funds could be cancelled by the registrar of such funds. Of interest is the decision on whether public functionaries have a general duty to investigate irregularities. No: whilst public officials have the right to apply for the review of their own decisions, there is no such duty imposed on them. What seems untoward, is the court’s statement that an investigation by KPMG, that the Minister did not have enough information available to him on making the decision to cancel the funds, that a reasonable person would have required to conclude that these funds had ceased to exist. Ms Hunter may well have lost on a technicality, but she has certainly exposed a raft of suspect decisions by the registrar.

The redoubtable Prof Sonnekus tackles quite a range of topics: this time he has it against the typical term found in contracts, which says that the signor binds himself as surety and co-principal debtor. He holds that this formulation is nonsense as these positions are contradictory. The article is in Afrikaans but has an English summary. Ask me for a copy.

“Men always want to be a woman’s first love – women like to be a man’s last romance.”

The flood of revelations about the higher echelons of the ANC having been Gupta tainted, continues. Mr Mantashe himself was drawn in and that worthy now maintains that he was unaware that a reminder to a bank that the government issued its licences, amounted to a threat. He’s either incredibly naïve, desperate or thinks that his electorate is stupid (he might consider himself in this respect). The papers report that he will explain this to the CEO of Standard Bank… I have no doubt that Mr Tshabalala is dying to understand his true meaning.

Holy what? The chair of the Commission for the Promotion and Protection of the Right of Cultural, Religious and Linguistic Communities has said that traditional healers should enjoy the same rights as religious leaders. The objection seems to relate to the government control of those who now enjoy similar rights as doctors. Interesting: she suggests that they want the status but not the control.

Hedging their bets. Last week I had mentioned an apparent pick-up in emigration: which appears to have been justified – the Business Insider this week published an article on wealthier burgers buying a second passport but not leaving the country.

I challenge you to understand this gem from Ace Magashule:

“I met with Zuma, but I did not intend on meeting with Zuma as a meeting is not necessarily a meeting to meet individuals but rather a meeting intended to meet with him in a capacity that we had already met.”

Shorthand for being assaulted by a woman: rack attack!

A: I don’t like this music and even if I did, you’d be the last one I would want to dance with.

R: I’m sorry, you must have misheard. I said: you look fat in that dress.

A man is being arrested by a female police officer, who informs him, “Anything you say can and will be held against you.” The man replies, “Boobs!”

How do you know man is thinking about his future? He buys two cases of beer instead of one.

A gentleman is simply a patient wolf. 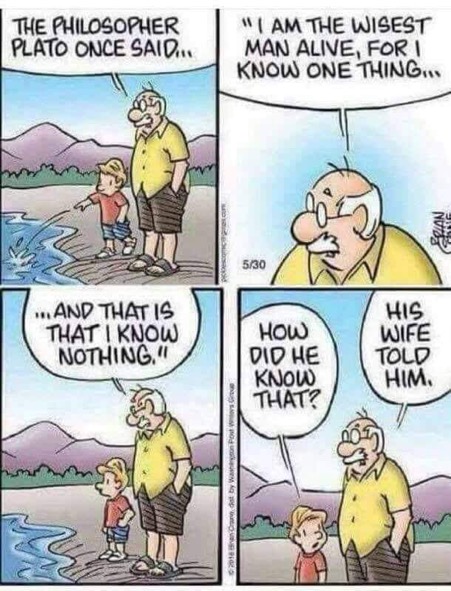