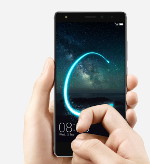 Huawei has unveiled its new flagship smartphone, the Huawei Mate S, at a recent special event in Berlin. The Mate S features new luxury-focused design packed with innovative technology to deliver the best possible Android experience. Key features of the new phone include a floating 2.5D screen, a pressure sensitive touch system and a new battery technology to give the users the maximum usages from a single charge.

This is in addition to enhancements to the camera, the fingerprint reader and the touch controls introduced in previous models.

“Our goal in designing the Huawei Mate S was to develop a smartphone that offers a personalised experience, rather than a commoditised one,” said Richard Yu, CEO of Huawei Consumer BG. “The Huawei Mate S is based on insights we gathered about human interaction – most notably that touch is a natural action we take to understand our world. The Huawei Mate S redefines how we incorporate touch technology into our smartphones, breaking through the conventional way of touch screen control and ushering in new imagination for human-machine interaction.”

The beauty of a curved surface: innovative design from inside out
The Mate S’ touch screen control technology uses an unconventional design to strike a balance between the phone’s brilliant capabilities and its stunning visual appearance.

Building on the revolutionary Huawei Mate 7 smartphone, the Mate S features a 5.5 inch 2.5D AMOLED screen that is 7.2 millimeters thick at the centre but with a width on the edges of just 2.65 millimeters. The arched back cover is designed to fit perfectly into the palm of a hand, making the phone less likely to be dropped.

Revolutionary pressure control that redefines the user experience
Touch is at the heart of the Huawei Mate S, creating an enhanced experience for users that simplifies their interaction with the device. When viewing photos, they can be quickly previewed and enlarged by pressing the screen with one finger, streamlining the operations of a traditional phone. The Mate S can also be used as a scale to weigh objects.

The phone is equipped with Fingerprint 2.0, an upgraded version of the advanced chip level security and one-key unlock technology pioneered in the Mate 7. Fingerprint 2.0 halves recognition speeds, with more accurate self-learning functions. It can also be used to control the notification bar, erase unread notifications, preview pictures, and hold and take phone calls. All of these options improve the one hand operation of the phone.

Fingerprint 2.0 and Knuckle Control 2.0 – technology first introduced in the Huawei P8 – simplifies how users switch between app operations and take screenshots. The feature offers users a new way to interact with their phone: drawing a “C” with their knuckle activates a camera, while double-clicking the screen with a knuckle records the screen in the form of a video. With these options, every type of touch provides an opportunity to be innovative.

The professional camera mode allows for manual adjustment of ISO, exposure compensation, exposure time, white balance and focusing, and functions such as the grid, and flash-assisted focusing.

Technology that adapts to every environment
The Mate S takes regular recording functions to the next level by leveraging three microphones to support a smart direction algorithm. The Mate S’ beam-forming algorithm allows all three mics to focus on the sounds coming from where the phone is facing, enabling a clear recording with minimal background noises.

Availability
The Mate S will be initially available in more than 30 countries including China, France, Germany, Israel, Japan, Spain, South Africa and UAE. The Mate S will be available for pre-order in Western Europe on Vmall.eu starting Tuesday, September 15.
Today Huawei also introduced its new Huawei G8, which is equipped with a 5.5 inch Full HD screen and 3000mAh battery compatible for super low-light photo taking.

Exact South African availability and pricing will be announced at a later date.

About Huawei Consumer Business Group
By 2014, Huawei’s products and services have covered more than 170 countries, and a third of the world’s population. Huawei’s shipments of smartphones ranked third in the world in 2014. Huawei has 16 R&D centers have been set up in the US, Germany, Sweden, Russia, India, and China. Huawei Consumer Business Group is one of three businesses within Huawei, covering smartphones, mobile broadband devices, home devices and cloud services. Based on more than 20 years of Huawei’s expertise in the telecom industry, built on Huawei’s global network, worldwide operations and business partners, Huawei Consumer Business Group is dedicated to providing the latest technology to the consumers and bringing the joy of technological advances to people all around the world. Huawei acts on its word and fulfills dreams. For more information please visit: www.consumer.huawei.com

Nokia 7 Plus: the flagship hero for everyone