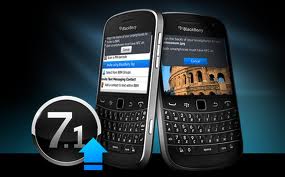 Customers can upgrade their smartphones to BlackBerry 7.1 for free over the air, by browsing to  http://za.blackberry.com/services/blackberry7/, or using BlackBerry® Desktop Software.

With BlackBerry 7.1, customers can be productive from virtually anywhere. Now they can turn their BlackBerry smartphone into a mobile hotspot that can be shared by up to 5 Wi-Fi®-enabled devices, including laptops and tablets.

A new Battery Saving Mode feature has been added which allows customers to extend the battery life of their BlackBerry smartphone when it is most needed. The new feature provides customers the option to have their smartphone settings automatically adjusted when the battery power reaches a level pre-defined by the customer. Some of the settings the Battery Saving Mode will automatically adjust include the brightness level, backlight timeout, and the mobile hotspot auto shutdown timer.