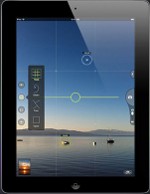 We all have used the standard issue camera on the iPad – you point and click and you hopefully get the picture you imagined – if it fails you keep going until you either get the picture you want or you give up. No more with Camera Awesome…
The first thing that impressed me was the “free roaming” exposure icon, which allows you to increase the exposure in certain parts of the picture. As lighting is often the problem on these “non-cameras” this feature makes a lot of sense and prevents having taking too many pictures to try and get the lighting for the subject correct.
Also on the left of the screen are the horizon level (keep your picture parallel to the horizon), composition (to give you the guide lines to plan your photo better) and the effects (basic photo effects for the photo) buttons. That is a good start for a “point and shoot” user like myself!
Around the “shutter release” button is a circular menu that offers you a good few image taking features, which include: image stabalisation, monster shutter release button (so you cannot miss the trigger), fast burst (low resolution), slow burst, timer release and interval shooting. I nice collection to add to the regular point and shoot, especially the timer feature which would give you time to get into the group photos.
There is also a video mode – which has a pre-record feature and gives you playback of 5 seconds before you start video recording – for those times when people tell you that you have “just missed” the best part of the recording!
Then once you have captured the image with the Camera Awesome you can use the photo editing tools to further enhance the pictures taken. A simple button called “Awesomize” offers you a couple of default image fixes to your image and you can drag the variable fix button across the screen to see if it enhances your image enough and then just apply the changes. Probably the button we will all use more than anything else. In this part of the application you can apply cropping, image effects, filters, textures and various frames – unfortunately some of the more advanced effects are for the bought version – which by the way is $9.99.
As with all apps, you can share with a number of social media sites or by email with one click of a button.
All in all, a great improvement on the regular camera you get with the iPad, and I would imagine with the New Generation iPad the experience will be even better.