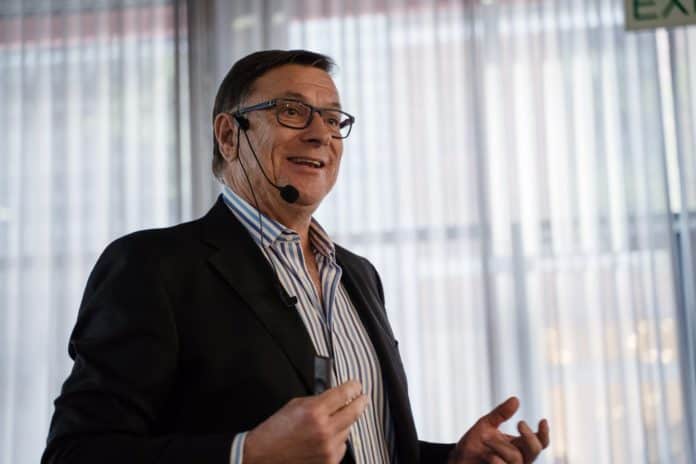 Having a Masterlass directly after a long weekend, specifically Easter Weekend filled with chocolates and hot cross buns, leads to a rude wake up call the Tuesday when life gets back to reality and those treats become a distant memory.

However from the moment Anton Musgrave started talking on 23 April 2019, at Radisson Red,  we were kept on the edge of our seats. From Robots acting as news-anchors, with such perfect mimicking skills that the robotic characteristics to which AI automated machines are prone are untraceable to the Rubric cube being solved in 0.38 seconds by a robot to discussions on how FAANG and the Gmafia could influence our laws and legal processes. “The Future of Law” Masterclass with Anton Musgrave can be summarised as: “enthrallingly exciting and exhilaratingly terrifying and mind breaking”.

Anton Musgrave himself practiced in Cape Town some years back. With the breakout of the Internet at that time, a passion was awakened in Anton and lead him to start thinking about how the internet could impact, alter and change the law. However, despite his enthusiasm on how the internet could impact the legal industry and the future of law,  he was most often met with cynical comments on how the internet would only be a FAD and not ever really a thing. Well, look who is talking now, and quit realistically at that, as shown by Anton,  the Chinse AI news anchor named Qiu Hao, developed by Xinhua and the Chinese search engine, Sogou to broadcast the news as a human news anchor, with whom it shares a strikingly real resemblance, with the only difference being that AI Qui Hao can broadcast the news “tirelessly”, 365 days of the year.

FAANG – which if you are a lay person like me  when it comes to modern acronyms and think FAANG is part of the millennial and Generation Z language and have no idea to what it means, then you wont feel to ashamed by my choice of words, that being that  Anton “introduced”  FAANG as reference to Facebook, Apple, Amazon, Netflix and Google. All massive earning companies that have kept up to date with technology changes and in this way ensured their respective place close by, if not in the G-Mafia. Who are the GMafia, well that is Google, Amazon, IBM, Facebook, Apple and Microsoft, 6 American companies who together with the three Chinese Companies known as BAT (Baidu, Alibaba and Tencent) are collectively known as the Big 9  and are currently the biggest tech companies with the potential of themselves becoming legislators and significantly impacting the legal industry and the way it has traditionally been understood. In this regard we all know the joke – why is 7 afraid of 9, because 7 8 (ate) 9 – well it would seem that the same applied to the legal industry, (Big) 5 should  be scared of the (big) 9.

Companies like Kodak, Blockbuster, Xerox and the like, who failed to keep up to date and grow with the evolution of technology, miserably saw their big profits and market share plummet. The fact is that the rise of technology has led to a change from extracting value from natural assets, to products being human made assets to learning to create big assets  – the world and the way of doing business has changed and we are only at the trough of a flux of change,  only just starting with the dawn of the Fourth Industrial Revolution.

The Fourth Industrial Revolution, although the buzzword of the time, is here whether we like it or not, with the emergence of enthrallingly exciting and exhilaratingly terrifying and mind breaking technologically and AI that renders anything we have seen to date as insignificant, as we are only at the beginning of the legal evolution of change and “We ain’t seen nothing yet.”

So what is the moral of the story , as so eloquently stated by Anton Musgrave himself,  we need to beware of and focus on the forces on the horizon, just in our line of vision, which will serve to shape the future of tomorrow and the context in which we conduct our business and practice law to stay ahead of the curve to ensure we remain competitive within the futures context.

If you want to catch a glimpse of the Masterclass and get a feeling of what the future of law may involve, see our website www.futureslawfaculty.co.za for some pictures. If you want to view some video footage of the Masterclass provided by Anton Musgrave please consider signing up for our Legal Tech (Short Course) or for a module of same to have access to some good reading material and the wisdom provided by Anton. Should you be interested please send an email to info@futureslawfaculty.co.za