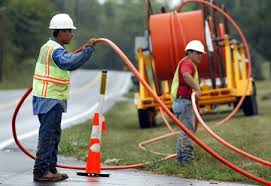 The fibre rollout race has been hotting up properly of late. Connectivity providers are falling over themselves to cover as much ground as possible with increasingly high-capacity fibre access at aggressive prices and with minimal lead times.

Fibre broadband Internet access is widely acknowledged as a foundation for digitally-enabled prosperity, as it “creates the platforms upon which users experience the Internet, and entrepreneurs and businesses innovate” (McKinsey & Co, Internet Matters). In addition, the Broadband Commission, a joint body of UNESCO and the ITU, found that for every 10% increase in broadband penetration, additional growth of 1.3% in the national GDP can be expected.

Currently there are about 10 key players investing into fibre infrastructure, with just over 200 000 km of fibre capacity deployed in South Africa – and growing. Telkom dominates with more than 70% of the national fibre footprint under its control, but new market entrants have had a significant impact on reducing the price of Internet access.

For example, in September Internet Solutions announced fibre access ranging from R749 per month for 2Mbps to R8 700 for 100Mbps. Starting out at 50 Gauteng business parks, commercial trials are under way in Cape Town and Durban.

Later on in the month, Vodacom announced its own fibre-to-the-business offering, starting at R2 599 for 2.5Mbps up to R16 999 for 100Mbps. Targeting small and medium businesses, Vodacom Business is likewise taking the service to the large metros countrywide.

And on the last day of September, Neotel announced it would drop the price of its 2Mbps fibre service to R1 600 per month, down from over R3 000. The telco is also dropping lower-capacity services.

For its part, Telkom is on a serious drive to get fibre to homes nationwide. The telco talks about taking its current tally of 2 000 directly connected homes to 25 000 by year-end. (It claims 600 000 connections when counting fibre to the kerb installations.) Telkom is expected to announce aggressive pricing by next month.

The winners
There’s no catch. Business and residential customers are walking out winners in this instance, says Dave Meintjes, CEO of hosted PBX provider Connection Telecom.

“This is true high-speed, lowly contended local access at excellent prices, which will kick the converged services game into a higher gear,” he says.

“For many years the supply side of the market dominated prices and service offerings, and the demand side of the market had to accept what came their way. At the network level, this has meant paying for artificial scarcity created by suppliers, for example Telkom withdrawingits highly profitable low-speed [sub-1Mbps] Diginet services from the wholesale market to minimise the impact this has had on the company’s voice services.”

Competition
Meintjes adds that the ‘land grab’ opens the market up for true competition.

“A plethora of providers are in on the act, providing great customer choice,” he says. “The price that links are going at makes it a numbers game – the more traffic a provider can attract, the better. Providers offering wholesale as well as retail access under the same roof will inevitably find themselves feeding the retail competition. Pricing will be less decided by who owns the infrastructure and more by the kind of service experience customers want.”

Looking ahead
In a competitive landscape such as this, things can only get better. It will be fascinating to see what offers will come up next, how widespread it will become, and what enablement is likely to result. Not only is it good for South Africans’ Internet experience, but it will contribute to improved economic growth.